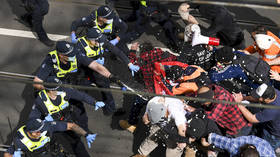 Victoria
police fire pepper spray during a clash with protesters at a Rally for
Freedom in Melbourne, Australia, Saturday, Sept. 18, 2021. © AP
Melbourne police and pepper-sprayed while she was on the ground during a
protest against Covid-19 lockdowns on Saturday.

As she held an Australian flag and stood on the road facing toward a
group of approaching police, one officer shoved the woman, sending her
tumbling to the ground. Another officer then pepper-sprayed the woman as
she laid motionless and unable to protect herself.

Seconds after
the attack – with the offending officers having already moved on –
another group of police officers came to the woman’s aid and attempted
to help her up.