Raised in the Rangitikei Aotearoa (NZ), I studied Social Policy and Social Work at Massey in Palmerston North in the ’70s and ’80s leaving with a Bachelor of Social Work. I later pursued my real love, Visual Arts at Ucol and have just in 2018 completed the Bachelor of Māori Visual Arts at Toioho ki Apiti, Massey, in Palmerston North. That was after a 12 year break with health issues. Whanganui born my mother was of English and my father of Māori descent, Whanganui River, Te Atihaunui-a-Pāpārangi, Ngāti Maru (Taranaki). Ruapehu is not Rangitikei’s maunga, however I chose Rangitikei for the the site name when I was still living in the Rangitikei. My maunga is Ruapehu however, and from the Rangitikei on a fine day is is very visible from certain locations, as also is Mt Taranaki. I’m considering changing the site name to EnvirowatchAotearoa since it has widened in its scope. A decision for later.

So … having lived through the Great Depression and World War II, my parents were survivors. Theirs was an era, going by their childhood memories, of much ingrained racism. With the vast Government land confiscations still going on, my father’s forbears’ lives changed forever, the repetitive cycle of Post Colonial Stress Disorder (PCSD) had already set in. Make no mistake, this passes down through succeeding generations. My mother’s forbears had survived the great land heists of the English Enclosure Acts, and her parents had come to NZ to find work and new opportunities.

My parents moved to the Rangitikei in the early 1950s after serving in World War II, with aspirations for their children to take up the opportunities that war and (man made) Depression had denied them. (Congressman Charles Lindbergh of Minnesota said in 1920, “financial panics are scientifically created”). My father had served in the Middle East, my mother was man powered to Wellington to work for the ‘war effort’. It was a time of new beginnings.

The post World War II era boasted full employment in NZ, right into the ’70s when you could still in the same week,  walk from one job into another. NZ was officially a welfare state, and the State Housing program was in full swing. My father trained as a builder in the trade training schemes following WW2, set up to provide ex servicemen with a trade. The State Housing program incidentally became privatized by the last National Government. It was informally over however, some years ago, with Rogernomics economic policies).

So, having built many State homes in Whanganui, my father then moved us from Whanganui after he had been contracted to build the Ohingaiti and Hunterville hotels. Both my parents subsequently ran their own respective businesses in hairdressing and building for fifty years, a time when small towns and communities in NZ flourished, were self sufficient, and people built homes to live in rather than to speculate as they do today. Every home back then had its own water tank and most had the standard vegetable garden, fruit trees and often a cow and some stock as well. Life was different then. We experienced community. As young kids we could safely walk home after the local movies and folks could leave their houses and cars unlocked.  Farmers tell me they all helped each other with their haymaking and harvesting … it was reciprocal.

I’ve seen all of that change over my lifetime though as main roads bypassed the small towns, gradually country schools, local Post Offices, banks, pharmacies, local hospitals and medical practices disappeared, leaving the elderly cut off from services when they could no longer drive (I’ve watched their angst as they are forced to decide whether to uproot to an entirely new and unfamiliar environment, or stick it out and take a chance they won’t become totally stranded with no one to care for them). Young people were left jobless and forced to move to the cities, often a backward move and not in my opinion, as the corporates tell us …. ‘progress’.  A NZ economist, Shamubeel Eaqub, a couple of years back referred to our rural towns as ‘zombie towns’ that ‘have to go’ …  resources are better spent on cities he reckons.  (You can read the news article here or watch a video). This  thinking totally undermines self sufficiency, community and caring.

Our rural towns shrank, not because people randomly decided to up and leave, but because of economic decisions made by people in Wellington.

When hospitals and other amenities and services closed, people were forced to relocate.  Towns don’t just randomly die, somebody somewhere changes policy in such a way that they can no longer survive there.   Not everybody believes however, that progress should be measured economically. In dollars and cents. To many people …  and many country folk get this … progress is measured in the holistic (whole) health of all the people and not just the wealthy and powerful, who tend incidentally, to be making the decisions..

“A nation’s greatness is measured by how it treats its weakest members.”
~ Mahatma Ghandi

A capitalist consumer focused society leaves many out and is creating an ever widening gap between the haves and the have nots,  a large factor I believe, in our growing suicide rate and our child poverty statistics. Holistic health is many faceted and includes not only our physical and mental well being, but our environments as well. I am not anti business, or all corporations per se, I am opposed to the absence of a human face in the dealings of so much corporate activity that is affecting everyday people and their everyday lives … to the greed that now prevails in the modus operandi of corporations. With Rogernomcis, NZ was heisted by the corporates with a subsequent ever expanding gap between rich & poor, increasing homelessness (43K+) & all the other negative stats that go with those.

People need and want to be employed, to be able to feed their families, to house them and keep them warm. Young people need a hope and a future. The extremes of corporate greed have made this very difficult for a significant proportion of the population. We have a food bill that even aims to make sharing of garden produce illegal. This is complete insanity. And corporate CEOs don’t need millions to live on. World wide there is now a push for assets of sovereign nations to be privatized and sold off to foreign investors  who will not return the fruits of those assets to their country of origin; they go offshore instead. And the assets are generally being sold without the consent of the public. This of course is selling off the family silver. Intended to get us out of debt, we are still in debt so it hasn’t worked & that rationale has worn so thin it is laughable. 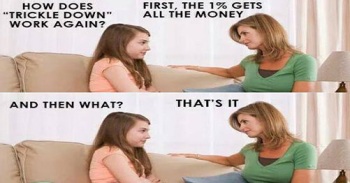 Corporates (when you peel off the layers of spin) see environments and people as resources to be exploited for profit. (Remember that corporations have acquired the status of personhood … a psychopathic personhood, the experts in The Corporation documentary tell us). When the corporation fails and causes damage, the shareholders, quite separate from the company, can quite easily wipe their hands of responsibility for their damage. They have

even managed to offload the responsibility for their damages onto the recipients of that damage, and their term for those damages …  ‘externalities’. By labeling these things with a special term they add to the professionalism of their spin and detract from what is really happening. The labeling of dangerous Smart Meters is another example of this. Calling destructive economic policies ‘restructuring’ or ‘structural adjustment’ is another.

(For further information on how and why small towns are dying, examine the United Nations 351 page document Agenda 21. For a breakdown of the document by one who has worked with the practicalities of Agenda 21, read ‘Behind the Green Mask’ by Rosa Koire ... also on Youtube). See also our Agenda 21 pages, including Agenda 21 in NZ.

There are now many unusual illnesses that are very prolific world wide,  illnesses for which there would seem to be no cures. In researching personal health issues however, I’ve observed and read the stories of many who have achieved good health and even miraculous turnarounds by natural and lifestyle means which included addressing faulty environments and a complete change of diet. We now have countless examples of folk who have beaten cancer even with treatments that are alternative to the mainstream. (Those alternatives however were once mainstream before being heisted by the Rockefellers). I have featured some of 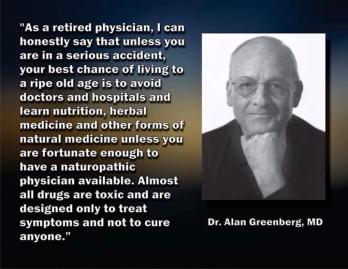 these here at our cancer pages. Needless to say with the site name ‘Rangitikei Environmental Health Watch’, I am keen to highlight environmental factors. Economics and the at times, flagrant negligence of corporations feature prominently.  I’ve learned in my journey that there are reasons for everything and when you dig a little deeper beyond what you see and read, you’ll find those reasons. History is more than what our history books tell us and there is more than one reason why some people are poor and others are not. It is not necessarily because they are lazy. We need to examine the bigger picture to join the dots.

NOTE: To search for a particular topic & related articles go to ‘categories’ on the left side of the page.

24 thoughts on “About the Author”

"Search for the truth is the noblest occupation of man; its publication is a duty"

“A nation’s greatness is measured by how it treats its weakest members.”