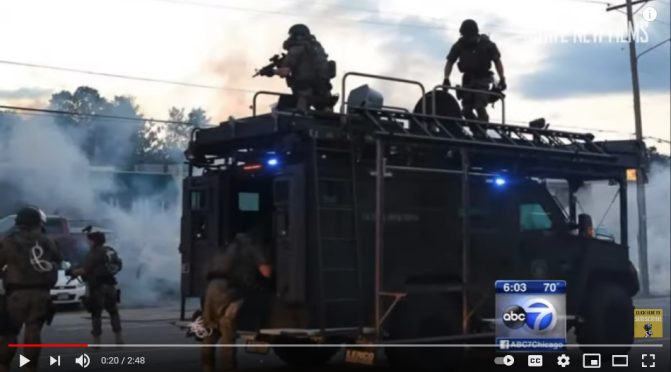 This illustrates how the military on our streets is becoming the ‘norm’. It is happening here in NZ also… with the military drills we’ve seen going on for years now, with international troops.

From Brave New Films YT channel
120K subscribers
Ever wonder why police look like soldiers? With the 1033 Programs, “Protect and Serve” Became “Search and Destroy”

The police should not look like a military force!

• Pentagon’s Excess Property Program (1033 Program) has supplied police departments across the country with more than $4.3 billion in gear since 1997. This includes $449 million in 2013.

• Military style police raids have increased in recent years, with one count putting the number at 80,000 such raids last year.

Police militarization grew out of our failed drug war. Does a town of 2,200 need a massive military tank? Why does the police department in Dundee Michigan need a MRAP (Mine-Resistant, Ambush-Protected vehicle)? They don’t. Military grade gear does not improve the safety and security in small towns. Defense Secretary Chuck Hagel must end the flow of military grade gear from the Pentagon to our local communities. It’s time for the militarizing of police to end.

We need to roll back programs 1033, 1122, and the National Defense Authorization Act. Sen. Claire McCaskill of Missouri will chair a subcommittee hearing tomorrow on Capitol Hill looking into police militarization.

You can fight back. Join us: http://www.youtube.com/subscription_c…