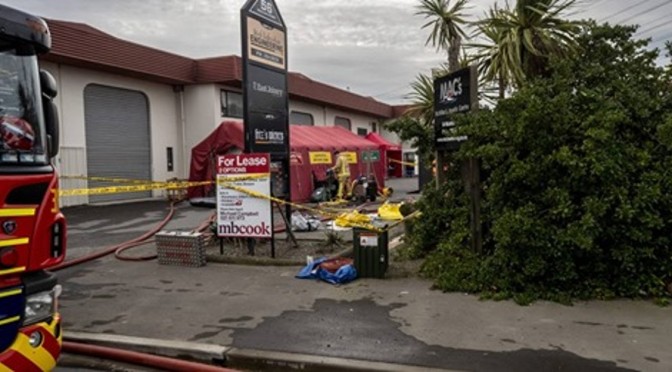 Excellent work by Stuff reporter, Joanne Naish. At last something is starting to come out in the open.

“The company did not dispute official documents from Fenz, but allegations the company was making 1080 at the site had only come from the “anti-1080 brigade”, he said.

“This message was sent with High Importance.

In June 2019 FENZ, in conjunction with Worksafe, was involved in an incident at Pest Control Research, 1/56 Wickham. The site remains contaminated following an industrial incident involving the manufacture of Sodium Fluoroacetate.

No entry is to be made to this building. The site report and Dispatch Safety Alert have been updated.”

On site are the following chemicals, according to a Work Safe email sent to FENZ and forwarded by Steve Kennedy to ? on 23 January, 2020. (I have a copy and have posted it up previously):

Ummmm….. why was there no hazardous chemical signage put on this building by Work Safe NZ – until 2020 when a small hazchem sign was put up beside the door?

Why was Unit 2, next door to this one, leased out towards the end of 2019, with the real estate agent who leased it out knowing nothing about what was through the wall, or so he told me? (The accident happened on May 28, 2019).

Read Stuff’s article at the link:

2 thoughts on “In spite of denials, according to Fire & Emergency NZ, the company called Pest Control Research in Christchurch was manufacturing 1080”