Things are warming up on the TPPA front with plans by the powers that be to sign on 4th February and it’s rumoured … at the Skytower. They will be keeping that under wraps for sure. I’m just mailing out the public notices regarding events from FB who have asked folks to share. Likewise do share these notices, email to your friends, tell the neighbours. The more on board the better. There are NZ wide meetings you may consider attending if possible. I’ll keep this page updated with the info as I find it. Do please let me know if I’ve missed anything or if there’s anything you’d like shared, both here and FB if you’re not a member.  EnvirowatchRangitikei

A blogger writes “So as some of you may or may not be aware. Our country is about to be sold on February 4th. Informers from Chile say the signing of the TPPA will be held here @ the skytower in Auckland New Zealand. When it is signed, our basic human rights will be stripped of us! They will sell the land, our home to foreign countries, more mining, water and air rates, prohibited to grow your own organics, loom seeds will be banned, prohibited to live off grid, not allowed to feed and clothe homeless, or to help poverty, etc etc.. as if they want to decrease population and destroy our mother earth sooner..shit that’s in humane! NZ citizens are calling for a march larger than ever. If you care about your children’s future, seek out sources for more info. And take one last stand!

Even though the TPPA may commence…as Tangatawhenua, we have to live trying to prevent such events, in respect of our forefathers who dedicated their lives for our current slice of freedom. And also regarding the future of our Pepe’s…please don’t ignore this.”  SOURCE

ITS OUR FUTURE BULLETINS 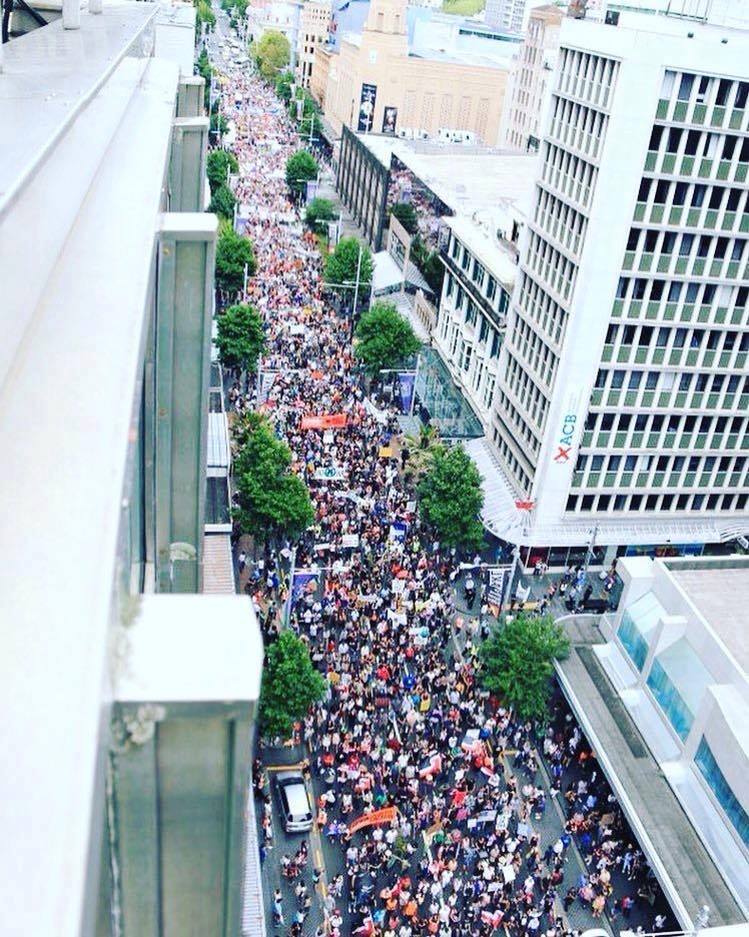 What an amazing protest!

Thanks to all who supported the protests, in Auckland and across the country, on 4thFebruary 2016. More than 15,000 people (some estimates put it as high as 30,000) marched down Queen St in one of the biggest protests in a decade. During the day, activists undertook rolling blockades of traffic across the city centre around the Sky City casino where the TPPA was signed. It has shaken the government and they are on the back foot. Despite the barrage of media spin in favour of the TPPA (especially in the Herald) we are winning the battle for public opinion.

In terms of the official process, the National Interest Analysis (a biased sell job, prepared by MFAT) has been tabled in Parliament. It’s Our Future responded calling for evidence not spin.

MFAT says: “The roadshows will present the outcomes of the TPP negotiations. Members of the public are welcome. The roadshows will also help businesses prepare to take advantage of new opportunities presented by TPP’s entry into force.  The morning session of each roadshow will provide an overview of TPP, and afternoon workshop sessions will have a more technical focus.

The secrecy-obsessed New Zealand government finally admitted that the signing would take place in Auckland but still hasn’t confirmed the date (although Chile and Peru governments did) or a location, although it almost certainly won’t be at Sky City as previously rumoured. Apparently the delay in confirming a date is because some governments (possibly Canada, Japan, Malaysia) haven’t fulfilled their pre-signing procedures – neither has New Zealand. The lack of a democratic mandate isn’t holding our government back. Hopefully several TPPA nations may decide not to sign.
Read more plus important events:  https://envirowatchrangitikei.wordpress.com/