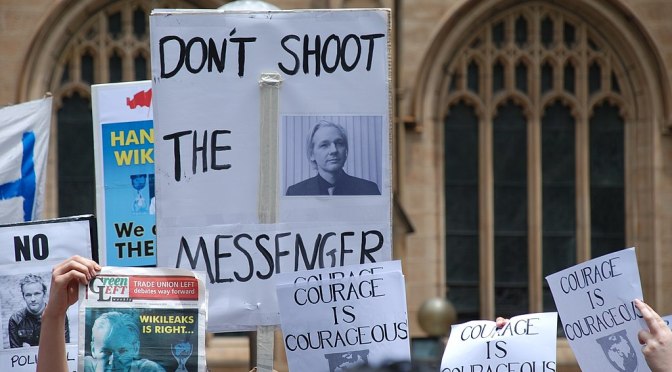 Back in May, retired USAF lieutenant colonel Karen Kwiatkowski said the CIA’s “Chemical Gina has her hands in this one, and we are being told that Assange is being ‘treated’ with 3-quinuclidinyl benzilate, known as BZ.”

On September 14, Kwiatkowski wrote Julian Assange “is being held on behalf of the United States and he is being chemically and physically interrogated in Belmarsh (the British Gitmo) in order to reveal his private cryptographic keys, and the names and cryptographic information relating to others within the Wikileaks information network.”

He has been reduced to the mental capacity of a drug-addled rubberhead, and some of these effects will be found to be permanent.  Physically he is reported to be underweight (under 100 pounds) with food and water being used as bargaining chips in his continued interrogation.  Ironically, even the prisoners at Gitmo, as part of the tender care by the USG, were force-fed when they tried to starve themselves to death.  Julian’s government caretakers are using food and water to break him completely.

The CIA and its media call this practice “enhanced interrogation,” an Orwellian term for torture. In the mid-1970s, the Church Committee and the Rockefeller Commission determined the CIA’s MKUltra was developed for the explicit purpose of breaking down individuals, destroying them psychologically and physically, and reformatting their minds. In the 1950s, the agency was searching for a way to brainwash subjects and turn them into amnesiac assassins.

The full extent of this program will never be known. The CIA destroyed its records on the MKUltra project.

In the case of Assange, as Kwiatkowski notes, the British and American torturers hope to break Assange’s “private cryptographic keys, and [reveal] the names and cryptographic information relating to others within the Wikileaks information network.” 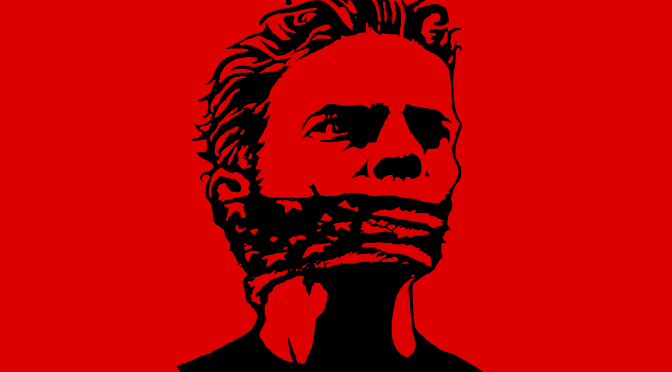 RT
Published on Sep 4, 2019
READ MORE: https://on.rt.com/a0zd Journalist John Pilger has delivered a stark warning from WikiLeaks co-founder Julian Assange, who said that his persecution is intended to kill dissent. “Speak up now,” Pilger said, or face “the silence of a new kind of tyranny.” RT LIVE https://www.youtube.com/watch?v=IFAcq… Check out http://rt.com Subscribe to RT! http://www.youtube.com/subscription_c… Like us on Facebook http://www.facebook.com/RTnews Follow us on VK https://vk.com/rt_international Follow us on Twitter http://twitter.com/RT_com Follow us on Instagram http://instagram.com/rt Follow us on Google+ http://plus.google.com/+RT Follow us on Soundcloud https://soundcloud.com/rttv #RT (Russia Today) is a global #news network broadcasting from Moscow and Washington studios. RT is the first news channel to break the 1 billion YouTube views benchmark. 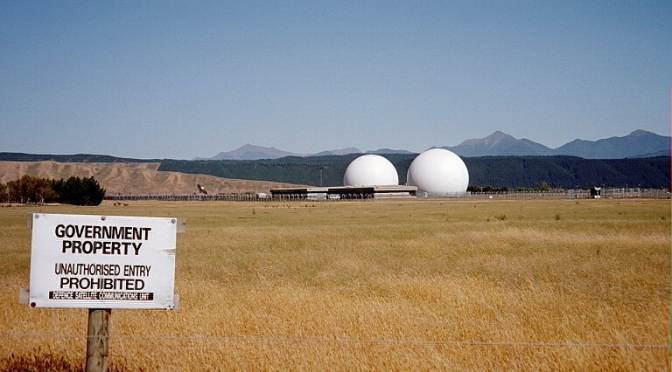 Definitely on topic currently with the erosion of our privacy & increasing surveillance of citizens. We’re seeing this currently in the Horowhenua DC, the monitoring of emails without the senders’ or recipients’ knowledge. Not to be taken lightly … EnvirowatchRangitikei

From uncensored.co.nz by Jim Lee

War leads to the erosion of liberty for the benefit of the military-industrial complex.  World War II set in motion the destruction of privacy and the formation of an Orwellian Police State controlled by the National Security Agency (NSA) of the United States of America.  Under the guise of cooperation and mutual respect, countries signed secret agreements with the NSA to share signals intelligence (SIGINT) which in layman’s terms means your phone calls, instant messages, and more.  [1] Shortly after World War II, the United States and its allies built the ECHELON system to spy on land and satellite-based communications worldwide. [2] Their closest allies, dubbed The Five Eyes (FVEY), received privileged treatment from the NSA community wherein these five countries share resources on a grand scale. [3] The Five Eyes are also know as AUSCANNZUKUS, short for AUStralia, CANada, New Zealand, UK, and US.   As time progressed the Five Eyes added two more tiers to their club: the Nine Eyes and Fourteen Eyes.  The Fourteen Eyes are officially known as SIGINT Seniors Europe, or “SSEUR” but I think we can unofficially call them: The New World Order.

This Anglosphere-based NWO group is now hell-bent on a United Nations based one-world government, with a single digital currency worldwide, and a completely disarmed populace. [4] The recent Snowden-disclosures should be enough to wake the people, however informal gas station polls show that Average Joe has no clue. Each member of The Fourteen Eyes of the New World Order is subservient to the Five Eyes, and all other nations are enemies of the one-world government.  To see this any other way is to have eyes and yet be blind.

(Collective-Evolution) “Studies that link Genetically Modified (GM) food to multiple human health ailments are not the only thing that has millions of people questioning the production of GM food. There is fact that previously classified secret government documents exist which show how the Bush administration developed ways to retaliate against countries that were refusing to use GM seeds, for example. If information about our food needs to be concealed from the public domain, then something has gone seriously wrong with the food industry. It’s great to have an organization like WikiLeaks shed some light into the world that’s been hidden from us for so many years…”

“The cables reveal that the State Department was lobbying all over the world for Monsanto and other major biotech corporations. They reveal that American diplomats requested funding to send lobbyists for the biotech industry to meet with politicians and agricultural officials in “target countries.” These included countries in Africa, Latin America, and Europe…”

“This is just one example that clearly shows how giant corporations pretty much dictate government policy. These food corporations are responsible for forcing independent agriculturists to go out of business. They control the world’s seed supply, forcing farmers to become dependent on their seed. Monsanto and corporations like it have created patented GMO seeds and are preventing farmers from seed saving and sharing, resulting in a dependence on their genetically modified product…”

See our Corporations page for more on how corporations operate. Watch ‘The Corporation’, on that page, for the finer detail of their workings. You’ll be surprized at the far reach of their persuasion & the lengths they go to to maintain control. This is why we need to oppose the TPPA (protest coming up on 14th November). Corporations are about profits and they will guard those to the death almost. They use well paid lawyers in their large armoury of tactics. GMOs are being resisted world wide now that more of the truth is out. Research GMOs for yourself if you’re not up to speed with them. Much of our food, particularly soy and corn is already GM, and it isn’t labeled. It has never been proven safe and there is much data now to cause you to want to refrain.