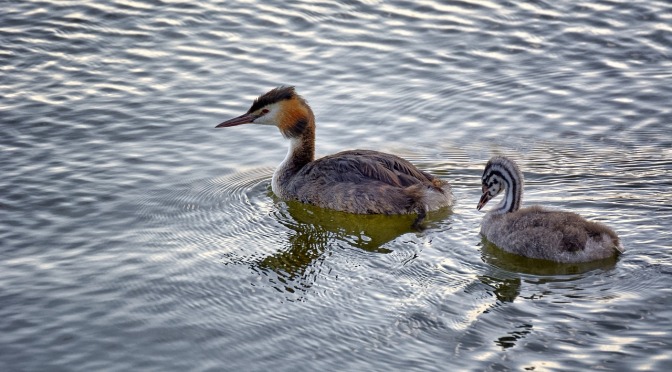 ‘The developers, a couple from Scotland and Malaysia who live in Singapore, reportedly acquired property in Arrowtown in 2015 after an 18-month process through the Overseas Investment Office. The felling of non-native willow trees and installation of the boardwalk is reportedly to improve their views.”

QLDC gave their approval as well.

Iwi , LINZ, ORC and Fish and Game were also consulted as so-called “affected” parties, but no-one else was… what did they agree to?!

You can read the article from The Wanaka Sun at this link:

This article makes me feel very sad, not just because of the grebes, but because gentle John Darby has devoted so much time over recent years to try and save the crested grebe. He is restrained in his criticism, where I would be wanting to lie under the bulldozers. He has built floating platforms for the birds to nest on around the marina in Lake Wanaka, and has been devoted to these rare creatures.

He was Assistant Director and Head of Sciences at Otago Museum before he retired to Wanaka. This article will give you some insight: 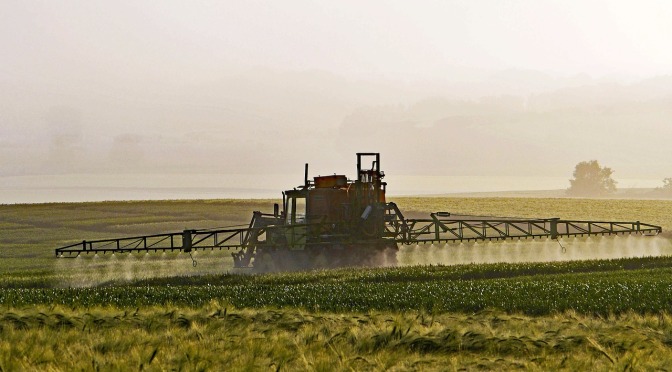 The Environmental Protection Agency (EPA) has determined that popular pesticides linked to declining bee populations also pose a threat to birds and, in some cases, small mammals and insects.

The EPA released preliminary scientific assessments of four chemicals from the neonicotinoid or “neonic” class of insecticides on Friday as part of an ongoing review that environmentalists and farmers are watching closely. Previous EPA assessments echoed research showing that neonics can harm the bees we rely on to pollinate crops when sprayed on cotton and certain fruits and vegetables.

“The EPA’s assessments confirm neonicotinoid pesticides are extremely harmful to birds and aquatic life at the very center of our ecosystems,” said Lori Ann Burd, director of the Center for Biological Diversity’s environmental health program, in a statement.

Environmentalists blame all four of the neonic pesticides under review at the EPA — clothianidin, thiamethoxam, dinotefuran and imidacloprid — for declining populations of honey bees, butterflies and other pollinators, including several endangered species. Of the four, imidacloprid is probably the most widely used and controversial.

In their most recent assessment, EPA scientists determined that imidacloprid poses an “acute risk” to birds when sprayed on crops. Birds, small mammals and insects could also be harmed if they eat crop seeds treated with the pesticide.

The findings echo a report published earlier this year that found imidacloprid and the controversial organophosphate pesticide chlorpyrifos can impair songbirds’ ability to find their way while migrating. Environmentalists are also concerned that the chemical may pose health risks to humans, including cancer and increased rates of autism in young children.

In 2016, the EPA also found that imidacloprid “potentially poses risk to [bee] hives when the pesticide comes in contact with certain crops that attract pollinators,” according to a preliminary assessment released at the time. 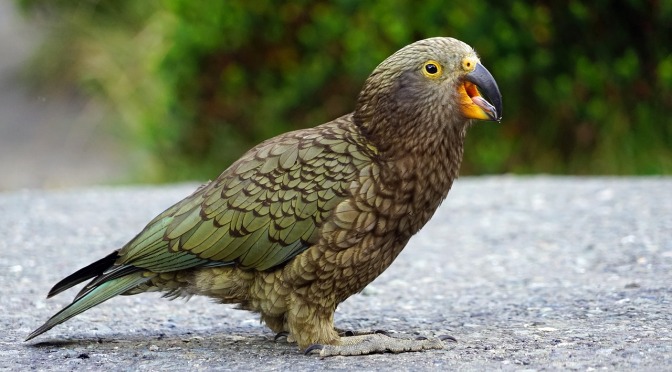 “The New Zealand Government’s Department of Conservation (DoC) is embarking on its largest aerial poisoning programme ever this year and endangered kea (Nestor notabilis), NZ’s mountain parrot, are almost certain to die.

DoC has a very long history of poisoning kea. Aerial poisoning with food baits laced with sodium monofluoroacetate (“1080”) was found to be killing kea more than 50 years ago and the species is now on the brink of extinction. Although the government has made no attempt to formally assess numbers, some estimates in 1986 and 1992 were already as low as 1000 birds. There may be very few kea left. Complete absences are being reported in areas of human activity (tramping huts, ski fields, car parks) where they have traditionally gathered.

In DoC studies over the last decade, an average of 12% of marked kea have been reported dead immediately after aerial 1080 poisoning, with a range up to 78%. Now that DoC are embarking on even more intensive, more extensive 1080 poisoning, there seems to be little hope for the species’ survival in the wild.

How is it that a government department charged with conserving species can cause this carnage?

New Zealand’s conservation management has reached a critically low point where science and ecology have been abandoned in favour of feverish poisoning of “pest” species. Tellingly, DoC recently described itself as a “pest control agency”.

According to DoC, it is pests that are endangering kea, therefore the outcome of poisoning will be beneficial. There are serious flaws with this idea.

Firstly, aerial baiting with 1080 poison is very poor at controlling pests, including mice, rats and stoats. Mouse numbers rise almost immediately afterwards; it is thought mice may be able to detect the toxin in food baits and that they flourish because competing species are poisoned off. Rat numbers are usually (not always) low immediately after poisoning, but they breed and re-invade rapidly and within months are typically far more numerous than before, often reaching plague levels. Stoats are sometimes killed, sometimes not (they have to eat poisoned prey to die, because they do not eat the cereal baits), but survivors and invaders can flourish post-poisoning as numbers of their main prey species, rats and mice, escalate. Surviving stoats are also known to turn to eating native birds after poisoning, when rat numbers have suddenly plummeted.

DoC’s answer to this problem is to now increase the frequency and intensity of poisoning. It is planning to spread double the number of baits, then if there are surviving rats, repeat the double-sowing. However that strategy does not help with the problem of non-acceptance of poisoned baits by mice. Whether rat and stoat numbers will be better controlled is unknown. In previous DoC operations, and in other pest populations (flies, laboratory rats and rabbits) repeated 1080 poisoning has become increasingly less effective because pests have developed behavioural and/or genetic resistance. One thing is for sure- kea and other rare native species will be severely at risk.

Secondly, there is no scientific evidence that mammalian pests are the main cause of the kea’s demise as is being claimed by DoC. Its own studies and ornithological studies had previously concluded (in the 1960s, 1990s and last decade) that although living in the company of stoats, kea were “relatively immune” to predation.

In the last few years DoC has made an intensive effort to prove that stoats are a major predator of kea. The evidence that its much-vaunted, very expensive 1080 poisoning programmes are killing kea has been very inconvenient and it has done its best to create the illusion that 1080 actually helps kea.

But DoC’s recent documents show only spurious, indefensible figures based on “seed rain” and contortions of historic data. Hundreds of hours of camera surveillance inside and outside kea nests have produced very little evidence of predation: at the Kea Konvention in April this year we were repeatedly shown a photograph of a stoat that was “about to get” a nesting kea, and a video that failed to run. Even if DoC’s surveillance had shown lots of predation, nest monitoring in itself is known to attract predators and cause adults to abandon chicks so such “evidence” would be hopelessly biased.

So kea are set to disappear, and DoC is set to blame pests, rather than 1080 poisoning, for their demise. The public will be none the wiser unless they are interested and motivated enough to question DoC’s propaganda.

The plight of kea should cause alarm for anyone concerned about the fate of New Zealand’s ecological heritage. Not only birds, but all air-breathing organisms including bacteria, fungi, plants and invertebrates are affected by 1080 (it interferes with the Krebs cycle used in respiration).

The toxin has a marked ability to spread: in cereal dust and fragments created during aerial spreading, in poisoned animals, baits carried by animals, urine, faeces, carcasses and water. On DoC’s own admission, reliable data on poisoning death rates exist only for six endemic birds. Of those, two (fern birds Megalurus punctatus and kea) have been found to be poisoned in large numbers. What is happening to the rest of New Zealand’s endemic species?

For the scientific basis of this article and more information on kea please see http://1080science.co.nz/scientific-reviews-of-1080/