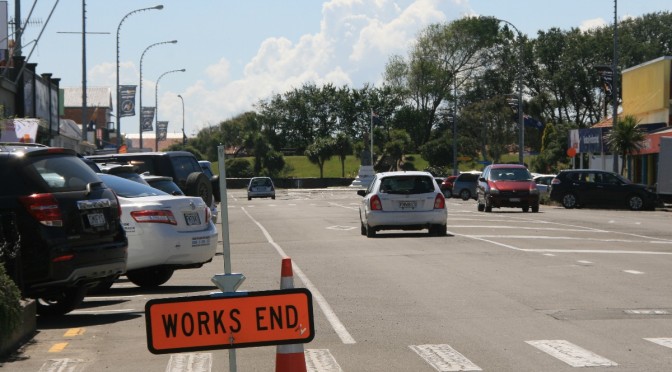 Folks from all around the Horowhenua gathered in the main street this week to express their disagreement once again with decisions that the Council have made that affect the public and not themselves. Need I repeat … the saga over folks wanting clean water and the Council wanting a street beautification that won’t particularly benefit them personally because they don’t even live in Foxton. They are in fact spending $1.6 million doing up the street to look like all the other main streets around the countryside, and meanwhile we bathe in chlorine and drink the same with the other contaminants contained therein. Slow poison from the cumulative effect or filter it at very great cost that few can afford. The street do up could wait or have a cheaper makeover in terms of new seal while more important matters are addressed like paying down the $68 million plus debt (other estimates are $100 mill) and fixing the water. What I have noticed at the protest is, of the many people who have stopped by and asked genuine questions, only a very few felt they’d been properly consulted and those who recall the more recent consultation meetings said they had been shut down. Those who could recall very early discussions, were back as far as 2010, when there was not a $68 million debt. This has changed now and there are different priorities. Debt & water.

The Council has reaffirmed their flip flop … Foxtonians received on Wednesday (the first day of the protest) a written letter from three members of Council pressing home in true DC fascist style (which is becoming the signature of Local Government dealings NZ wide … remember they’re corporations) that the street do up will be going ahead, AGAINST the promise also made to Mayor Feyen by the CE. (Hear Mayor Feyen speak about this here). Agenda 21 has seeped well into the councils now. Learn on our Govt Watch pages (main menu) how many folks have been ruined in more ways than one in their fights with local Councils. (You can read the the letter from the three Councillors at the following link: foxton-main-street-upgrade). Councils typically hold ‘consultation’ meetings, shut down the dissenters who don’t agree with the plan, tick the ‘consult’ box and plow ahead regardless. Contracts appear to go to certain people and other people complain they are not opened for public tendering.

Now the media reports that our new Mayor has been thrown off the committee that is looking at the community housing sales people don’t want (and he has always openly stated that he is against selling off the housing stock), so much for democratic representation. His anti-sale stance gets him removed from the committee? And Council is democratic? In his term as a councilor he and Cr Ross Campbell were put off committees with no reason given, he spoke about this as Mayor in the early Council meeting when Councillors removed Ross Campbell as his appointed Deputy.
(You can sign the stop the housing sale petition here).

Remember also, HDC is in at least $70 million debt, a debt that has been regularly questioned with no answers, and has met with a blatant refusal to open the books to the public. So what’s to hide?

Watch this space because HDC are in for a long battle here. People will not be run rough shod over forever, and particularly not the people of the land, tangata whenua. Council appears on their website to be all for partnership. Read their fine sounding rhetoric… remember :

“The treaty is a partnership between Māori and the Crown, which requires the partners to act toward each other ‘reasonably and with the utmost good faith.’4”  Treaty Principles – from the Waitangi Tribunal

Horowhenua District Council recognises the importance and special position of tangata whenua within the region.

Memorandum of Partnerships are becoming increasingly important as Council seeks closer and meaningful working relationships with the Maori community, to achieve effective consultation on a wide range of issues affecting our respective areas of governance.

Through its decision-making processes, Council recognises the principles of the Treaty of Waitangi and kaitiakitanga, providing for the relationship of Maori and their traditions with their ancestral lands, water sites, waahi tapu and other taonga.

Council is committed to the continuing process of consultation with Maori in the District, and has worked with iwi on a number of collaborative projects including our prestigious Culture and Community Centre – Te Takeretanga o Kura-Hau-Po.
SOURCE

In reality however, and as we ‘speak’, this fine DC has plans to allow the spraying of human effluent (basically human sewage) all over a Māori burial ground … a wahi tapu at Matakarapa in Te Awahou. Now if anyone should head up to the local public cemetery with one of those septic tank vehicles full to the brim with sewage and empty it all over the graves there, what do you think would happen?