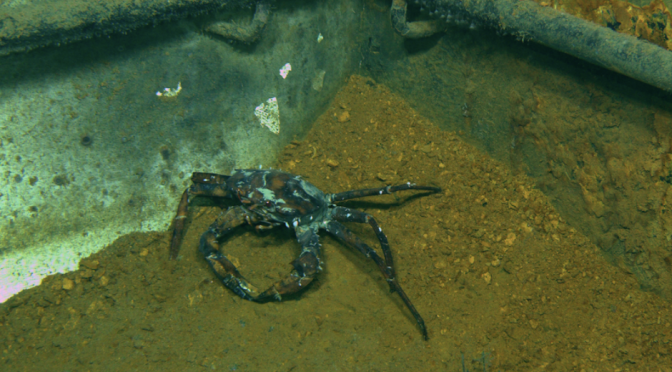 As the 10-year anniversary of the horrific Deepwater Horizon oil spill approaches, the area’s ocean floor has been transformed into a fetid wasteland coated in tar and populated by handfuls of deformed, tumor-ridden crustaceans.

The explosion on a BP oil platform in the Gulf of Mexico on April 20, 2010 was one of the most catastrophic disasters to hit the ocean in human history, with the U.S. government estimating that 4.9 million barrels (210 million gallons) were discharged across hundreds of square miles.

But new video footage from a 2017 expedition has confirmed the worst fears regarding the catastrophic spill, showing that the Gulf is not only still reeling from the disaster but may have been rendered a permanent dead zone.

The footage was captured by a camera-mounted remotely operated vehicle (ROV) operated by a team at the Louisiana University Marine Consortium, or LUMCON. Their findings on the apocalyptic ruin lying extant across the once-thriving deep sea was recently published in the journal Royal Society Open Science.

When marine researcher Clifton Nunnally first saw the footage uncovered by the ROV, he was blown away by the horrors that he witnessed.

Nothing prepared us for what we saw, [Clifton said.] … a slick black wasteland, empty of all its usual denizens, such as sea cucumbers and giant isopods. Instead, the area had been taken over by strange crabs and shrimp, either tumor-ridden or eerily languid, as if sleepwalking across the seafloor. The typically white marine snow—detritus that had drifted down from organisms living above—was jet black and clumped up. It was clear that the site was toxic, and maybe irrevocably marred.

While the area had previously been known for its rich biodiversity, the zone surrounding the Deepwater Horizon site was devoid of such features as sea anemones, sponges and corals typical of that part of the deep sea.

“It was like visiting a graveyard. There were even slimey “webs” at the seabed that looked like cobwebs. It was the only time I’ve been in a submarine along the seabed and found myself sad and dreading what was coming next.”- UGA’s @SeepExplorer https://t.co/JBQ4hdYmol

Instead, they found some shrimp and a number of deformed, mutated crabs with shells blackened by oil, covered in parasites. In many cases, limbs and claws were shriveled or entirely missing.