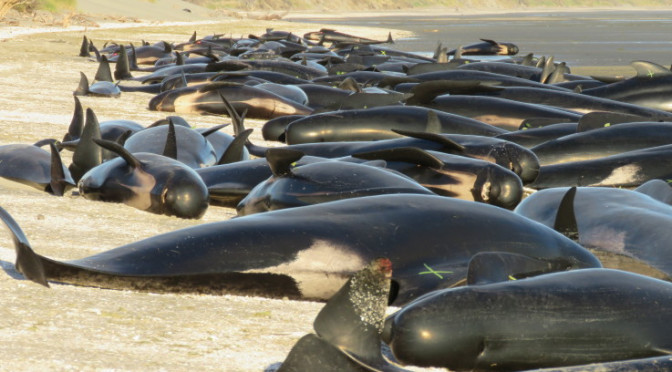 There was another threatened stranding of our sea creatures recently in Northland on 8 December, this time dolphins. Right on the heels of 80-90 stranded whales on the Chathams recently, 51 of those did not survive as of 30 November 2018. There were also two other NZ strandings, one on Stewart Island that saw 145 dead, another in Northland which saw a loss of 5.  This is all so tragic and with Christmas almost upon us the enormity can tend to fly under the radar. There will be more for sure. We posted a while back on this topic with other strandings, joining dots & making links to causes other than the usual mantra the authorities roll out as they have in this article.

DoC said exactly why whales and dolphins stranded was not fully known but factors could include sickness, navigational error, geographical features, a rapidly falling tide, being chased by a predator, or extreme weather. More than one factor might contribute to a stranding.

They never mention the factor that recently had alarmed conservationists in the US up in arms:

Defenders of ocean habitats and marine life are up in arms on Friday as the Trump administration is set to approve new abilities for the fossil fuel industry to conduct widescale and “deafening” underwater seismic in federal waters off the U.S. Atlantic coast.

Early in 2017 NZ saw the biggest whale stranding ever, located at Farewell Spit … 400 whales beached with 70% of those quickly lost.  Here is a mainstream media link to the event:
http://www.stuff.co.nz/nelson-mail/news/89265113/Mass-whale-stranding-at-Farewell-Spit

In that article at the link there is another article referenced …  Why whales strand and how to help them. It cites the usual reasons already mentioned; ‘whale strandings are natural occurrences’.

Media is predictably quick to eliminate man’s interference with the environment as causal regarding any environmental damage. If you’re familiar with this site you will know that this denial is not uncommon. Corporations whose primarily focus is profits all vehemently deny that their practices cause damage. They are also well armed with a bevy of well paid lawyers to ‘legally’ destroy anybody who threatens those profits. People are targeted, assaulted and even lose their lives standing up to corporate profiteering.

That said, it is well to search for and consider the independent information on all events since corporations cannot be trusted to tell you the truth. They tell bold faced lies. If you doubt that watch ‘The Corporation’ doco found on the Corporations page.

At 1.45 minutes the effect of sonar from military ships is explained and at 2.22 minutes, the effects of seismic exploration for oil and gas on marine life. As many Kiwis will know our oceans are now replete with activity from the latter, especially since our ‘esteemed’ and recently departed leader John Key signed away drilling rights to his corporate friends. Key and his corporation (aka known as the NZ Government) have no regard whatsoever for our natural environment. Corporations are about profits not people or environments. See more on Key below.

John Key and the Oil Industry

VIDEO INFORMATION: “Basically, John Key is [was & his legacy continues] killing whales and dolphins, and potentially ruining the seafood (crabs, crayfish etc) industry in the areas where this seismic survey technology is used.

the Media has not told you ANY of this…

The main environmental concern for marine surveys is the potential of seismic sources to disturb animal life, especially cetaceans such as whales, porpoises, and dolphins. Surveys involve towing an array of 15-45 pneumatic air guns below the ocean surface behind the survey vessel and emit sound pulses of a “predominantly low frequency (10–300 Hz), high intensity (215-250 dB).

Seismic testing is not fully responsible for whales running ashore or becoming stranded, but there is evidence that it plays a major role. Studies of seismic effects on several whale species such as Gray, Bowhead, Blue, Humpback and Sperm whales indicated substantial effects in behavior, breathing, feeding and diving patterns.

On November 28, 2004, Reuters reported that during a three day span, 169 whales and dolphins beached themselves in Tasmania, an island off the southern coast of mainland Australia. The cause for these beachings is not known, but Bob Brown, a senator in the Australian parliament, said “sound bombing” or seismic tests of ocean floors to test for oil and gas had been recently carried out near the sites of the Tasmanian beachings.

According to Jim Cummings of the Acoustic Ecology Institute, seismic surveys utilising airguns have been taking place in mineral-rich areas of the world’s oceans since 1968. Among the areas that have experienced the most intense survey activity are the North Sea, the Beaufort Sea (off Alaska’s North Slope), and the Gulf of Mexico; areas around Australia and South America are also current hotspots of activity.

The impulses created by the release of air from arrays of up to 24 airguns create low frequency sound waves powerful enough to penetrate up to 40km below the seafloor. The “source level” of these sound waves is generally over 200dB (and often 230dB or more), roughly comparable to a sound of at least 140-170dB in air.

According to the Australian Conservation Foundation, these 200dB — 230dB shots from the airguns are fired every 10 seconds or so, from 10 metres below the surface, 24 hours a day, for 2 week periods of time, weather permitting.

These types of tests are known to affect whales and dolphins, whose acute hearing and use of sonar is very sensitive.

On December 24, 2004 there was a magnitude 8.1 earthquake more than 800 kilometres southeast of Tasmania near New Zealand, with a subsequent aftershock 6.1 a little later in the morning that same day.

Then on December 26 the magnitude 9.0 earthquake struck leading to the devastating tsunami that killed more than 300,000 people.

On December 27, 20 whales beached themselves 180 kilometres west of Hobart on the southern island state of Tasmania.

http://www.energy-pedia.com/article.a…
As part of Budget 2009 a total of $20 million over three years will be allocated to the seismic data acquisition programme run by Crown Minerals, which is responsible for the administration and promotion of New Zealand’s oil and gas.

LINKS TO THE OTHER THREE VIDEOS IN THIS SERIES can be found by locating the video at Youtube. The other videos will be there on the side bar to the right.

Call for autopsies on stranded whales; concern about seismic blasting

For more in depth information and interviews on seismic testing, the oil industry and the agenda of foreign oil companies here in our waters listen to three interviews with Rose Paige from thecontrail.com This is info you won’t be hearing in mainstream any time soon :