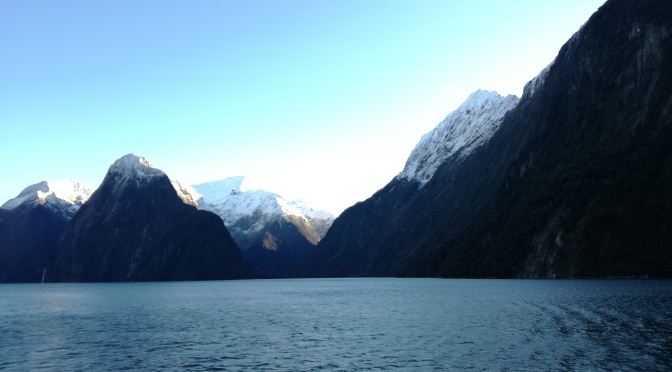 DEPT OF CONSERVATION TELLS TOURISM COMPANY OFF – Skippers are not to warn tourists about the dangers of drinking the water after aerial 1080 drop in Milford Sound area yesterday.

Pam Vernon reports (15 October, 2019) “A reader at the Envirowatch Rangitikei site today commented about warning the tourists on the dangers of drinking the water: “Hi there my brother works as a skipper for one of the biggest tourism companys in Milford and one of the skippers warned the customers on the mic and a doc member was on the boat and got seriously offended called her boss then doc warned the company gave them a chewing. The company forced all skippers to say nothing at all or risk consequences. The company is afraid of the bad side of doc because that’s who gives them there consent to cruise in Milford. Blackmail against freedom of speech. This is real as of the other day.”

“DOC poisoning operation in Milford tomorrow
Who the hell gives DOC the right to poison our only water supply, the Bowen Falls?
650,000 tourists come here every year to view this pristine environment, if only they knew….. “

I’m told the Bowen Falls are in the drop zone, and the whole township at Milford Sound and all the tourist boats are supplied by water from that source.

OIA responses from Southern DHB and DoC state there is a buffer zone round the Milford water intake which they regard as sufficient. See attached, (plus maps from original notification of the drop).

The Milford Sound water intake is approximately 200m above the Bowen Falls, and I’m told the intake is only about 100m inside the top end of the buffer zone (yellow area on map). Helicopters were seen working along that face. Helicopter pilots tell me 250m is a minimum buffer zone for safety, and more if on a slope, as baits tumble into valleys. Poisoned carcasses will inevitably end up in that waterway, as well, providing further contamination.

Here is Milford Sound skipper, Sacha Stevenson, on the issue:

“The Bowen River catchment valley is rather like a giant granite bath, with very little top soil, and average rainfall of 7000mm per annum. Together with winter temperatures, ice and snow melt, this will likely increase the risk of 1080 arriving at the intake at the same time and breaking down much more slowly.”

Put it this way… I wouldn’t be drinking that water !

According to Leslie McGrath, the Dept of Conservation will not take water tankers in to supply safe water because it is “too expensive” ! However the Department’s response to a request for alternative water supply is at the bottom of page 3 in their OIA response attached. 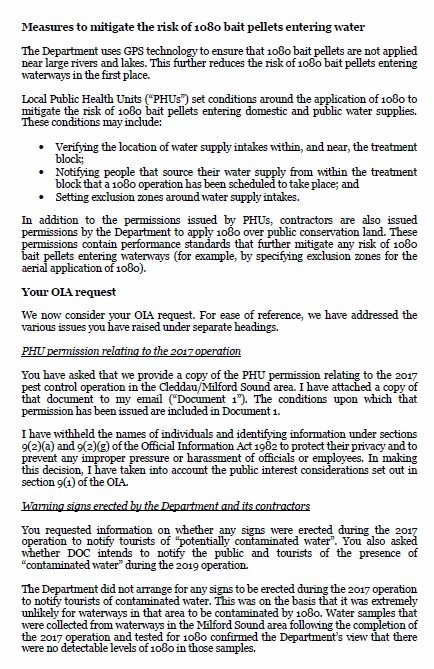 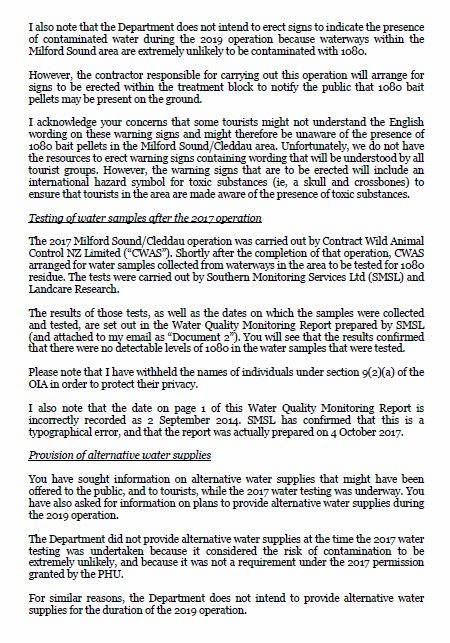 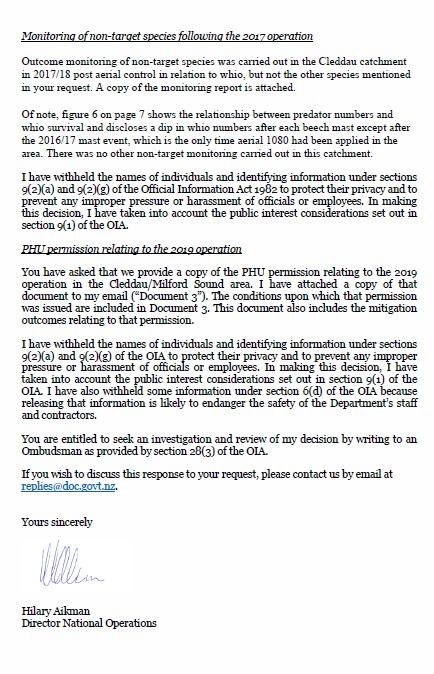 In 2016 the Ministry for Primary Industries released a warning to trout fishermen, not to eat trout from 1080 poisoned rivers for at least 7 days. However, as the MPI warning was based on incomplete, and erroneous information. In this video clip Brett Power demonstrates why trout fishermen should be far more cautious when consuming trout from New Zealand forest streams …