We’ve been reporting the agenda for years, and now it’s formalized. Post-quake Christchurch belongs to the UN New World Order. How so?

Immediately after the 2011 quake that devastated the CBD and large portions of the Eastern suburbs, the government stepped in and purchased the “Red Zone” land. As for the rest, the government and local council nutted out responsibilities and ownerships. Taxes were raised, rates were raised, and insurance payouts dished out (and private insurance raised).

Now, the land and assets purchased and owned by The Crown has now been essentially handed to local council.

What does this actually mean?

On the surface, it would appear that land and assets have gone from government ownership into the hands of “We The People”, the ratepayers of Christchurch. Wonderful, you think? Dominic Harris (no relation) thinks so:

Handing authority over the residential red zone to the residents of Christchurch is a welcome return of power to the people, campaigners believe.

Ownership of the vast swathe of land where almost 7000 houses once stood will be transferred to the city council over the next two years as part of the final post-quake settlement between the authority and the Crown.

Touted as a ‘proud moment’ Prime Minister Adern is being praised for wearing a korowai in Buckingham Palace, pictured in the Guardian article talking with the Queen of England. Is it really a proud moment though? Yes the korowai is indeed beautiful as also is the Māori culture, but I am remembering the ongoing treachery & oppression for centuries by the Crown and what they have done to indigenous people not only here but world wide. The Queen currently lays claim to one sixth of the planet & in her grandmother’s era it was boasted of Great Britain,  there was so much of it, “the empire on which the sun never sets“.  They reserve these token ‘cultural’ displays for the fawning media and the public who never read our real histories. The Crown took the bulk of Māori land via the ‘Land Taking Court’, (a must read) and banned the language, relegating Māori to these token displays reserved for special occasions only.  Gut a people to the bone then cherry pick a few items that will serve for opening & closing occasions of pomp & ceremony. And here, the time worn tradition continues, while they drink toasts to the Queen’s large acquisition, the Commonwealth (common wealth?) thanks to her Grandmother Victoria, and Jacinda trots out the beautiful Māori proverb about what NZ suddenly now counts  as the most important thing in the world? – ie ‘it is people, it is people, it is people’ … really? …  back home as she speaks, 43K+ sleep on the streets, in garages and in cars.

OK it was under the Nats’ watch we acquired the dubious status of most homeless in the developed world, however if you look closely these politicians are all of the same ilk basically, same bird, different wings. Jacinda may not have created this huge new chasm between and rich & poor in NZ courtesy of Rogernomics, but she stands here as representing it and if you stand back it really is breathtakingly hypocritical. No matter how good the politician’s intentions, the globalists’ shadow government will always have their way.  They’ve just all but gifted one tenth of our South Island to wealthy people offshore. Also as we speak, a bevy of international bankers have their eye on Fiordland & I doubt it’s about possums and ferrets.

Note also, the Queen has just announced she wishes Charles to succeed her on the throne promising a ‘sustainable’ future (that global government catch phrase again). This is a good time to read The Sustainable Prince by Joan Veon who studied and wrote at great length about global governance, one world government aka Agenda 21/30. The end game is world control, not the happy global community you are being led to believe.
EWR

The article below is from theguardian.com

New Zealand prime minister Jacinda Ardern has caused a stir with a striking image of her walking the halls of Buckingham Palace swathed in a traditional Māori cloak during this week’s Commonwealth heads of government meeting.

The prime minister wore a Kahu huruhuru; a Māori cloak adorned with feathers and bestowed on chiefs and dignitaries to convey prestige, respect and power, said Mark Sykes, guardian of Māori special collections at Te Papa, the national museum of New Zealand.

Sykes said Ardern’s choice was a proud moment for Māori around the world. “Cloaks are worn for warmth, protection and to symbolise your status and mana [power],” said Sykes. “I think it shows how she is portraying herself as a leader of Māori, of all of New Zealand, of everyone. It made me feel proud. She wore it well. She wore it so well.” 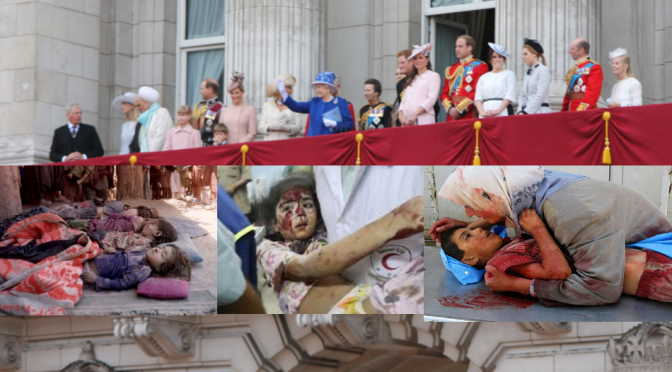 TEXT BY HEATHCOTE WILLIAMS. EDITING AND NARRATION BY ALAN COX.http://www.youtube.com/user/Babylonroyal

Britain’s Queen Elizabeth II is one of the world’s richest women. Her investments in the arms trade include firms that produce the uranium used in depleted uranium (DU) shells. The deployment of these shells by the US military in its attack on the Iraqi city of Fallujah in 2004 is believed to be the cause of a huge increase in cases of cancer and birth defects.

For a more in depth view of the history of the Royals and weapons trade within that context the following video is a must watch. Don’t be put off by the Sex Pistols’ image of the Queen. The doco is actually factual & detailed tracing back hundreds of years. See what the royal family is really about and how much wealth the Queen really owns, it is far more than the info in the first video states. For instance, three of Prince Phillip’s sisters married Nazis. Not what we are generally told about. And there’s more that will surprize you.  EnvirowatchRangitikei

Since it’s Queen’s Birthday this weekend (not her official birthday which is 21st April) here are a few pertinent facts you may like to ponder:

From ‘Who Owns the World’ by Kevin Cahill and Rob McMahon