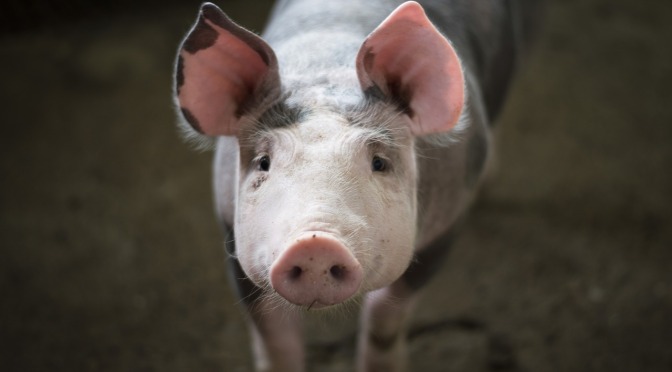 Note Kiwis, some time back I contacted two well known local farming enterprises, one that produced pork and the other chickens. I asked both if they fed their stock GMO feed. Both sidestepped a direct answer by telling me they couldn’t rule it out because the feed is not labelled. What is the bet it’s GMO stock feed? If it weren’t both of these companies would be clambering at the opportunity to prove their produce is top of the line. But no, just ‘we can’t rule out GMOs’. Sad. Read below at naturalnews.com what GMO feed does to pigs’ stomachs, and likely yours as well. And be aware NZ approved the use of a GE bacteria pig growth hormone in 2001 & it isn’t labeled. The only way around this is to buy organic meat or go vegan. Even then with the latter you are better off to choose organic. The following article is from NaturalNews.com

(NaturalNews) If you have stomach problems or gastrointestinal problems, a new study led by Dr. Judy Carman may help explain why: pigs fed a diet of genetically engineered soy and corn showed a 267% increase in severe stomach inflammation compared to those fed non-GMO diets. In males, the difference was even more pronounced: a 400% increase. (For the record, most autistic children are males, and nearly all of them have severe intestinal inflammation.)

The study was conducted on 168 young pigs on an authentic farm environment and was carried out over a 23-week period by eight researchers across Australia and the USA. The lead researcher, Dr. Judy Carman, is from the Institute of Health and Environmental Research in Kensington Park, Australia. The study has now been published in the Journal of Organic Systems, a peer-reviewed science journal.

The study is the first to show what appears to be a direct connection between the ingestion of GMO animal feed and measurable damage to the stomachs of those animals. Tests also showed abnormally high uterine weights of animals fed the GMO diets, raising further questions about the possibility of GMOs causing reproductive organ damage.

Proponents of corporate-dominated GMO plant science quickly attacked the study, announcing that in their own minds, there is no such thing as any evidence linking GMOs to biological harm in any animals whatsoever. And they are determined to continue to believe that, even if it means selectively ignoring the increasingly profound and undeniable tidal wave of scientific studies that repeatedly show GMOs to be linked with severe organ damage, cancer tumors and premature death.

The study was jointly announced by GM Watch and Sustainable Pulse.

Lead author of the study Dr. Judy Carman stated, “We found these adverse effects when we fed the animals a mixture of crops containing three GM genes and the GM proteins that these genes produce. Yet no food regulator anywhere in the world requires a safety assessment for the possible toxic effects of mixtures. Our results provide clear evidence that regulators need to safety assess GM crops containing mixtures of GM genes, regardless of whether those genes occur in the one GM plant or in a mixture of GM plants eaten in the same meal, even if regulators have already assessed GM plants containing single GM genes in the mixture.”