A small reality check here: our waters in NZ are no longer pristine … in fact only 40% of them are safe enough to swim in. Our PTB have settled for ‘Ok to wade in’. This warning by DOC was later retracted (see end of article) however in my opinion, from reading the info, the evidence for its safety doesn’t stack up. Do research it for yourself….   EnvirowatchRangitikei

New Zealand has some of the best trout fishing in the world!

Every year, thousands of international visitors wade pristine rivers in search of the freshwater game fish.

The Department of Conservation is using helicopters to aerially spread the deadly pesticide 1080 poison across New Zealand’s forests and streams. The poison is targeted at introduced possums and bush rats, but many other animals, birds and insects are killed, including deer.

The poison contaminates the food chain, and in a rare admission, the Department of Conservation is warning fishermen to avoid eating their catch, despite paying for the privilege …

Here is a media alert at the time from stuff.co.nz:

“Anglers are being warned to avoid eating fish caught in back country waters as they could be tainted by 1080 poison.

The Department of Conservation plans to aerially drop 1080 poison across 700,000 hectares of conservation land, mostly in the South Island, to reduce rodent numbers.

Fishing groups expressed concerns that mice – which were often eaten by trout – could carry sub-lethal amounts of 1080, posing a food safety risk for humans.

DOC predictably scaled back their warning  further down the track, however NZ Fish & Game advised erring on the side of caution … “Fish & Game advises that if you have concerns, you should not to eat trout flesh from trout caught in 1080-poisoned catchments, until advised otherwise.” The following video by the Graf Boys takes a closer look at the research cited which ‘officially’ deems the risk from 1080 to aquatic life ‘low’. There are holes in it.

I personally consider it essential for you to research 1080 for yourself. There is much spin about many products from corporations whose bottom line is profit. You need to keep an open mind and read the independent research as well. Long gone is the day we can simply trust what a corporation says. Their legal obligation is to their shareholders, not you. Don’t believe me? Watch The Corporation documentary. And eat any wildlife from poisoned areas at your own risk.

In a letter to the CE of Waikato Regional Council, the CE of the Environmental Protection Authority suggests that 1080 poison does not harm aquatic life, and breaks down into harmless bi-products in water.

However, some of the research referenced – Niwa freshwater ecologist Dr Alistair Suren’s work – highlights a common trend in the poison industry, with regard to the misrepresentation of 1080-poison science by New Zealand authorities, and those that use the poison …

See also our 1080 pages for info & links, &/or search categories for further related articles (at left of any page).

Consider liking our FB page &/or following our blog (right of any page) to help spread the word on all the untruths we have been told – we are about exposing corruption and lies!  Use the share buttons! 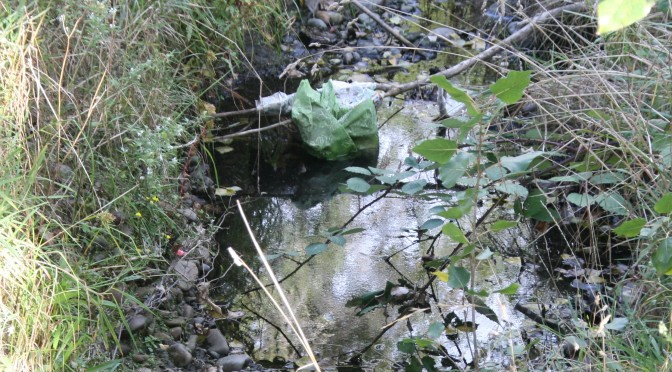 See the stats! It really is 100 percent pure illusion! In our own district we’ve had no in stream biota survey since 2002 – and one year later we’re still waiting for an RDC estimate for when the next one will be – in spite of a 3 yearly consent requirement! Note in the header image, taken locally, the banks are also often slathered with glyphosate, a known, probable carcinogen.

“Of 112 monitored lakes, a 2010 Niwa study found 44% are eutrophic – so burdened by excess agricultural nutrients that they have become murky, smelly and inhospitable to many fish, reports Joy. Almost all (90%) our lowland wetlands – the “kidneys of our waterways” – have been destroyed. Three-quarters of our native freshwater fish are threatened with extinction (up from 20% in the early 1990s), yet only one – the grayling, which has been extinct for decades – has legal protection.”
Listener 26/11/15

Note: Since the Key National Government came to power, the word ‘sustainable’ has been deleted from governmental and departmental vocabulary.

New Zealand is currently running at 162nd in our environmental performance out of 180 countries globally.

It is extremely difficult to access data on water quality in this country as it is ‘locked away’ from public scrutiny, even the Ministry for the Environment does not write it up for public consumption.

Researchers have to spend hours and days searching out any little snippet of information that is buried in Regional Council reports, because these reports too, are filed away from community analysis.

The reason for this impediment is because there is no Agency in this country that deals with such basic and important factual statistics and information and if this accumulated data was in the public domain, the Ministers involved would look so bad that the charade of ‘Clean Green NZ’ would be coherently shredded.

Yet, the latest statistics that are available for public information still go back to a 2004 report. Even though the 300 areas that are tested and sampled ‘to this day’ remain hidden from public view, and can not be accessed by scientists like Dr Mike Joy.

This vital information is being ‘censored by omission’ and the Ministry for the Environment and the 16 District Councils, only issue ‘feel good’ information on the better sites, (the upper high country where there is no population or industry) never the true story in the low land areas of farming, industry and population density. In essence, making a silk purse from a sows ear!

And it has been only in the last 20 years with the intensification of dairy herds that our water has really lost its purity. This due to the addition of far too many cows, as the population continues to increase.

11 humans are equal to one cow in their capacity to ingest and excrete. A conservative estimate is equal to 66 million people inhabiting NZ, the same population as the UK.

With the intensity of increasing cow numbers huge amounts of urine ends up in paddocks and in the process is changing the soil chemistry and seeping down into the water and into the greater catchment area, and this is not being factored into the pollution equation.

Adding to this, commercially manufactured urea is being spread on the land from urea plants as well as the use of more phosphorous to speed up plant growth, however a by-product of super phosphate is cadmium. NZ is now dangerously close to toxifying its soils, plant life and live stock with excess cadmium that ends up stored in the kidneys and liver of live stock, that if the animals are over 18 months of age – it is illegal to sell kidneys and liver for eating. (This is news to me!)

NOTE: New Zealand children are already exceeding the European levels of cadmium from our food chain

Scientists here in NZ like their counterparts worldwide are reluctant or prohibited from speaking out on environment or health concerns, for fear of losing their funding, or losing their job. They are under the hammer to keep their mouth firmly shut! Such is the power of the commercial imperative!

Treasury, which is the tail that wags the dog in this country is bloated with economists and Mike posits the idea that if we could have another department alongside it full of ecologists, we would strike a dynamic balance.

Mike says that what is happening in nature is that the fauna are now acting as the canary in the coal mine.

The tiny white bait (inanga) in our streams are being seen as the indicators of the health of our water ways and they are all being threatened, 4 out of 5 are now on the endangered list, same for fresh water crayfish and our eels, and the eel story Mike tells is near on bizzare in the extreme.

KPMG, one of the largest professional services companies on our planet, states in a new report that New Zealand has 5 years to clean up our clean green image, or we will lose it!”

The Listener
By Rebecca Macfie

Ecologist Mike Joy’s unsanitised views of the sorry state of our fresh waterways make him a target of vitriol. But he’s not about to change his tune…If the pollutants that leach through our intensively farmed soils and into lowland rivers such as the Selwyn made the water run red, we’d quickly grasp the scale of the problem, says Joy. Instead, the water at Coe’s Ford – a spot where he spent blissful days as a Christchurch schoolboy in the 1960s and 70s, and where he now stands as one of New Zealand’s loudest environmental whistleblowers – is polluted by invisible toxins.  READ MORE

Now see PM John Key make a complete fool of himself by denying the raw stats quoted by the interviewer from Joy’s research… even claiming we are 100% pure! The denial continues.