Ex Horowhenua Mayor Michael Feyen speaks about the alternatives proposed by the Advance NZ party that will create job opportunities for the people. (Currently the associated dollars funnel into the 1080 poison state owned gravy train). Michael has always been supportive of alternatives to 1080, during his time as both councilor and mayor with the Horowhenua District Council. Unfortunately it was not a vision shared by enough of his colleagues to have gained any traction. Time for change. EWR

“Extraordinary” alright. In the midst of the growing current NZ-wide distrust of the poison that’s constantly been touted as next to harmless, DoC appears to be in damage control mode as their 1080 edifice cracks & crumbles, making much here of the scenario that the cows allegedly broke through a fence to the 1080-treated adjacent area. Listen to the video however as this family are interviewed. A lot of questions remain unanswered. Scrambling to control the public perception of 1080 now with independent reviews to prove their credibility, yet killing 89 of NZ’s iconic treasured native Kiwi garnered not ONE test to see if any of them died of 1080 poisoning. Small wonder they are losing credibility. Then was their opportunity to prove to us all that the Kiwi did not die of 1080 poisoning but back then the public believed all the glossy brochures that told us only pests died from 1080.

One of the owners notes that they have not found one dead possum (one of those pests we’re told are ‘targeted’, a miracle given 1080 kills ALL oxygen breathing animals and organisms, including insects … it was developed initially as an insecticide) … and to state the obvious, this land could clearly have been covered by bait stations. Why was an aerial drop used? We are frequently told aerial drops are required for inaccessible areas. It is routinely applied however ‘near homes, farm boundaries, public highways and into rivers from which drinking water is drawn’. Many examples of this have been highlighted more recently as the issue has come under closer scrutiny.

The point here also is, this is not an isolated & rare incident. DoC’s investigation of such incidents however is. They should really order reviews on all of the other stock deaths that slipped under the radar, many on account of being hidden in the paperwork. Yes farmers are asked to declare their stock deaths (farmers who want compensation for those losses) as something other than stock deaths. Hear farmers interviewed on that at this link.

A working document summarizing significant poisoning events connected to aerial poisoning for pest control in NZ estimates the total numbers of deaths in farmed deer/cattle as being 3,408, estimated in 1976 to be approximately 158 per year. This would total approx. 10,000 since 1954. Actual recorded data is likely to be a small percentage of the whole total.

Dr Meriel Watts records the incident in the ’90s where 570 sheep were poisoned by 1080, with sheep still dying six months later.

Total numbers of dogs: could be as high as 6816 per year which equals 429,408 over 63 years of aerial poisoning operations.

Read the full information at this link.

Below is a link to tvnz’s article on the independent review.

“There never was, never is and never can be valid justification for mass slaughter with a universal super toxin. It is chemical warfare. It is ecocide. there is NO justification!” …   (Tom Look Stop 1080 Now FB page)

After receiving an apology from OSPRI Operations Extension apparatchik, Jennifer Lawn, for saying they had found a Tb-infected ferret in the Timaru Creek 1080 drop zone in 2015-16 when in fact they HADN’T, and with that little creature being part of the justification for the aerial 1080 drop to kill possums, despite no possum monitoring having been done…. ( yes John Cleese would have had fun with this little lot ! )…Alan Galletly has sent Ms Lawn another letter. Because we will probably have to wait the standard 21 working days to receive this obviously terribly overworked poisoner’s reply, I am posting it up here now, along with the apology about the ferret.

As you can see from their printed material the justification for the 1080 drop is ” Tb ferrets ( note plural ) and pigs have recently been detected on the south eastern side”. ‘Recently’ means over two years ago, no Tb infected ferrets have been found in the drop zone, and the pig story is dubious ( see Alan’s letter ). The population of the target animal, the possum, has not been ascertained by OSPRI, who say they only have funds for post-drop monitoring, not pre-drop monitoring.

We need to correct some of the information supplied in response to your previous request.

The infected ferret was found 5km to the south of the planned aerial operation. We apologise for this error.

The correct information was used in the planning of this aerial operation. Your further requests for information have been received and we will respond as soon as possible within the required timeframes.

Thank you for the update regarding the infected ferret.

You state that the correct information was used for planning of this aerial operation yet your printed material available to the public clearly states a TB infected ferret was taken from Timaru Creek.

This was also stated by OSPRI staff at the Hawea Information afternoon.

Clearly this leaves the question , What is the correct scientific information OSPRI have planned this aerial operation on? Is it based solely on the assumption the feral pigs were living in Timaru Creek ?

All these assumptions aren’t enough evidence to plan an aerial poison drop on surely without solid scientific evidence to back them?

Could you please confirm the infected pigs actually came from the planned drop zone.

It has come to my attention that these pigs were shot in the vicinity of Stodys Hut which I believe is on the edge of the drop zone.

As this hut is near the ridge line there is no certainty that the pigs were in fact living in the Timaru Creek catchment but may have crossed the ridge line from Lake Hawea Station country.

The timing of when these pigs were shot also suggests this as at that time of year feral pigs prefer warmer , dryer country.

It would be unlikely for them to frequent the shady side or lower country in this catchment at this time of year.

It is clear OSPRI is assuming these feral pigs were living in Timaru Creek when in fact they may not have been correct. 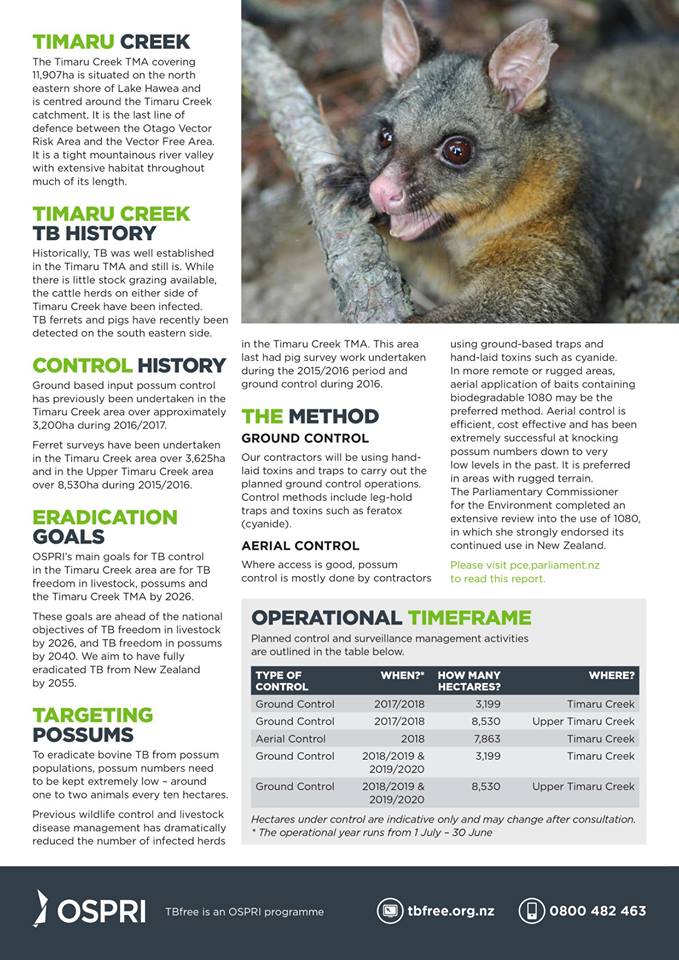 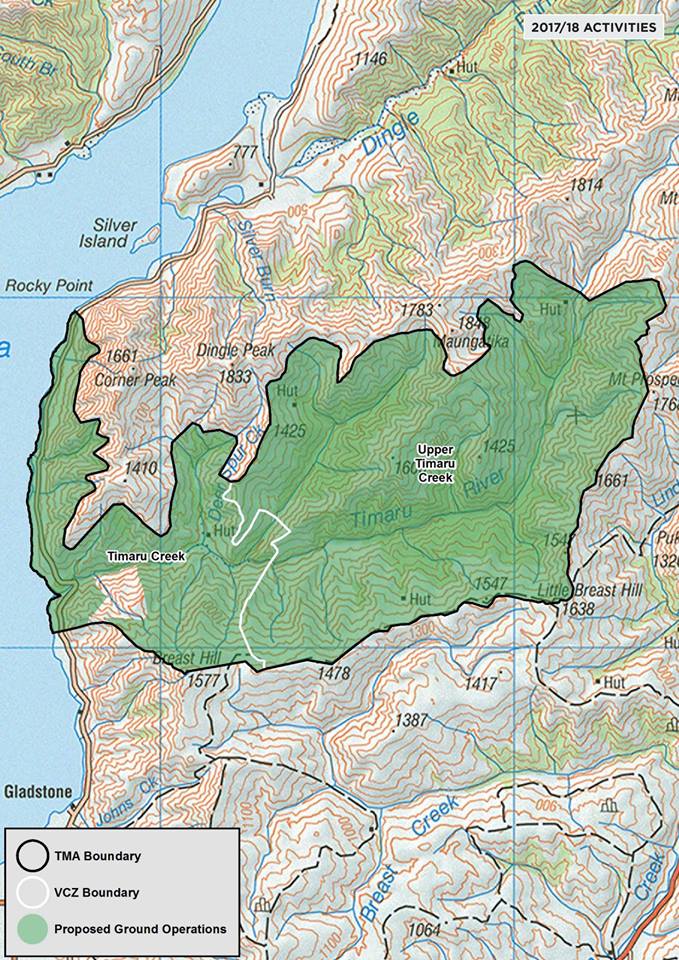 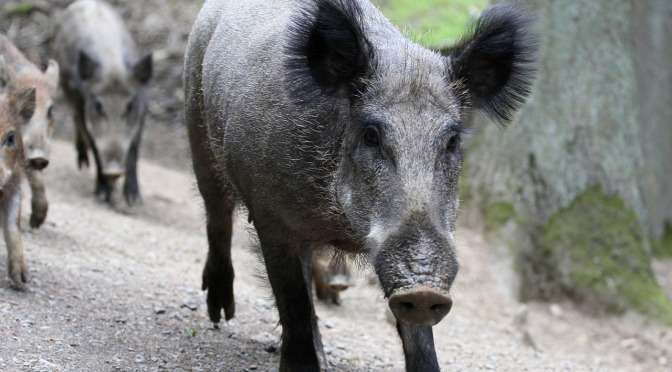 “…in the process of elimination the doctors think it is definitely some sort of poisoning within the boar itself so maybe the boar has consumed poison before it was shot down and so whatever was in its blood has found itself in to theirs ….”

With the recent case of poisoned pig meat causing serious health affects in three members of one New Zealand family the world is watching and asking are we seeing a new form of botulism?

”…In summary, if this is proven to be due to botulism, by identification of the toxin in either the patients and/or in the food, the description of the time of onset of the symptoms would make this reportable as 15-30 mins post ingestion is highly unusual…”…

In short they are questioning if this is indeed botulism given the symptoms or even a new strain.

However, they do not know New Zealand’s history of dropping a deadly poison into its eco system a poison so deadly there is no antidote – a poison that kills anything that breaths oxygen and that can be up taken by both plants and animals in sub lethal doses.

interestingly in a Radio NZ interview – family friend and church member Joji Varghese, had this to say

..“…in the process of elimination the doctors think it is definitely some sort of poisoning within the boar itself so maybe the boar has consumed poison before it was shot down and so whatever was in its blood has found itself in to theirs ….”

It serves no one to obscure all possibilities because one might upset a million dollar industry.

...”….Feral pig control in Australia is heavily reliant upon poisoning with sodium fluoroacetate (1080) bait. Tissue residue levels may be considerable and pose a potential risk to non-target consumers. Tissue/fluid samples (liver, kidney, stomach, stomach contents, small intestine, large intestine, muscle and eye) from lethally poisoned feral pigs were removed and assayed for fluoroacetate concentration. The digestive system, specifically the stomach contents and stomach, consistently contained the greatest concentration of 1080 within individuals. Few non-target animals apart from introduced mammals (fox, dog, cat) appear at risk from consuming muscle tissue, however, many native species may be at risk from consuming visceral tissue (especially stomach and contents). The practical risk is probably low and reduced given the rapid decomposition of carcasses in the field. Regular consumption of poisoned pork may exceed the recommended daily intake of fluoroacetate and be a risk to human health, but there is a low probability of this occurring…”..

What I am learning through others in the Stop the drops movement is that Sodium Fluoracetate metabolises into FluoroCITRATE or is a metabolite of compound 1080.

…”….It has been known for many years that fluoroacetate and fluorocitrate when metabolized are highly toxic….”…

In a separate study – a vet is calling for an investigation into a toxin in wild pigs that affects dogs and might also make humans sick. – which begs the question – might this also be connected with compound 1080 being up taken by plants and eaten by pigs

If you would like to help the family please go here

Farmers talk of their losses in this clip from the Graf Boys’ ‘Poisoning Paradise’ doco. Deaths described by those interviews include 6 cows, 13 deer, 250 sheep, 160 sheep, cattle and more. When farmers are compensated for their losses they’re declared as, in one case, ‘track maintenance’ and another, ‘stock food’. Included for one farmer was the requirement to sign a confidentiality clause. Complete dishonesty & whitewash by our authorities. Those mandated with ensuring your safety. Still trust them? The clip goes on to discuss the risks of the poison entering our food chain … very real risks if you listen to the eye witness evidence. Possum exports rejected by Japan because they’d seen documentary evidence on 1080 poison drops amongst our animals. A must watch. Please share. Show it to the nay sayers.
EnvirowatchRangitikei

Like our FB page &/or follow our blog (right of any page) to help spread the word on all the untruths we have been told – we are about exposing corruption and lies!  Use the share buttons!