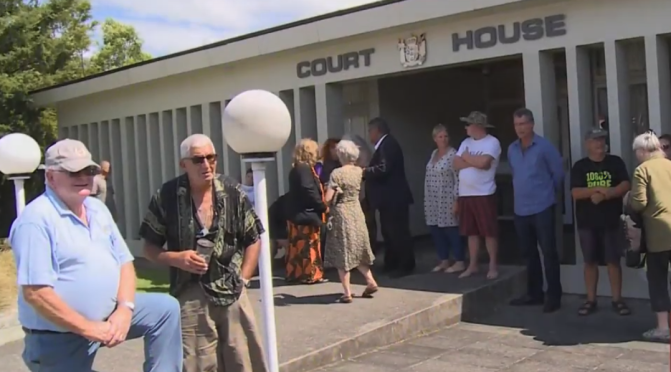 FROM AN OBSERVER AT THE TRIAL:

“Right from the opening statements the prosecution was painting a picture of Graeme Sturgeon as a real hell-raising rebel. Twisting facts, pressuring for mistakes. It’s pretty obvious in the security video if you look at the continuation of ( security guard ) Richard Lane’s movements. After wrenching the door open he lunged inside, punching Graeme at this stage. Completely disorientating him.

Now Lane commented here that he thought Graeme was reaching for a weapon. A convenient statement to justify his illegal entry. At no time did he stop and/or say anything to alert Graeme. This was a cowardly ambush. Even the judge repeatedly picked up on this heinous omission.

Why were better options not taken ? His reaction was “Basically I assumed he ( Graeme ) was trying to arm himself”. The fact that Lane was unlicensed at this point was factored in, but not emphasised enough as to have a big bearing on it Just noted. The truck driver who was within a few metres distance repeatedly claimed that he could see Graeme punching Lane and kicking him in the stomach. But this was proven to be inaccurate because of very limited light and because Lane was actually obscuring his viewpoint. This witness repeatedly fumbled replies, trying to stick to the rehearsed fabrication. He even made the statement that he was afraid Graeme was going to actually drive into his truck. Panicky at this point, he was. But yet he was still considered a credible witness later in the judge’s summing up.

Next up Graeme Sturgeon took the stand. He was very firm in his recollection of events up to being assaulted by Lane. Then understandably shaken up. He denied kicking Lane. And the video does clearly show him swinging punches in defense. I only saw one actually connect with Lanes head. A glance. We watched this video probably 20 times, and at slow speeds as well.

Lane claimed he had a sore jaw for a month, and a sore stomach for a couple of days. Now at no time was any first aid offered to Graeme.

Lane was on a mission, also harassing Dr. Wendy Pond and Diana Halstead. Lane also claimed there were half a dozen protestors with placards out the front so he was expecting trouble. This was another wildly inaccurate statement used to justify his actions. In fact there were onlythree people and it was not obvious that they were protestors. They had no placards.

So that was the the end of Day One and the subsequent unprofessionalism of the reporter there meant Graeme Sturgeon got a roasting in the news report – trial and conviction by media. Before the verdict. We just want fair representation from media. That’s not too much to ask.

And our next witness Diana Halstead also spoke very well. She stuck to her points even when the prosecutor repeatedly tried to twist her version of events and timing of headlights etc. Her reason for being there was being with Graeme. She was shocked by Lane’s thuggery. And then she told of the police officer who attended – and getting a very mediocre response. He spoke to DoC staff first and did not even check Graeme’s injuries. He was just there to basically take down time sequence events, and to organize statements at a later date, as the security detail had disappeared with the 1080 poison-loaded trucks by this time.

So overall it was a complete fabrication to try and make the case. But I don’t think this was a clear cut result, as it could easily have gone the other way. So those three seconds of door opening ( Graeme Sturgeon’s vehicle ) which were hidden from view were critical to the point that the judge was quite correct in summing up. There is no evidence that either threw the first punch and Graeme undoubtedly was acting in self defense against an extremely savage attack from Lane. Case dismissed. Victory for us.”

Photo – Graeme Sturgeon after being punched by Richard Lane