This is becoming a regular occurrence going by similar other reports & posts we’ve featured here. Poisoning Paradise would be correct (see Graf Boys’ video of that name). Still our deluded leaders continue to promote us as clean and green. LGNZ is currently advertising a handy app to make it easy for you to see which of the 40% that’s left of swimmable rivers is ok for you to take a dip in. Whatever way you look at it somebody manages to make a dollar or two out of the whole farcical debacle. This product (1080) is a deadly poison! All I can conclude here is take care folks if you plan tramping in the bush this holiday. Watch also what you catch and eat. Check out our 1080 page for links to further info.
EnvirowatchRangitikei 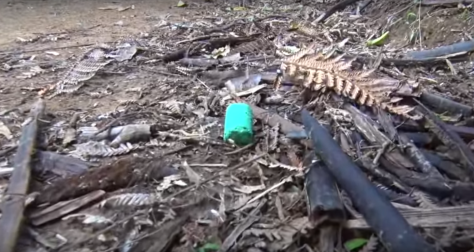 “It was like big hail drops hitting the water around us,” said New Zealand trout fishing guide Scott Murray who is a co-owner of River Haven Lodge near Murchison.

It was no ordinary hail storm. The ‘big hail drops’ were toxic 1080 pellets.

The 1080 drop was a joint effort by Ospri for possum “control” and the Department of Conservation’s “Battle for Our Birds” predator control programme. It was December 2, 2016 when Scott and his two guests helicoptered into the Mokihinui River that enters the Tasman Sea north of Westport on the west coast of NZ’s South Island. The upper reaches in the river’s north and south branches are of wilderness character. Also in the area the same day was Zane Mirfin a Nelson guide and two guests. Zane Mirfin’s Californian client was incredulous when Zane explained what the aerial bombardment with 1080 pellets was about.