So we are coerced into getting jabbed to obtain ‘protection’ (touted everywhere), then when that doesn’t happen they shift the goal posts. They continue to have it both ways… because they can. After all they are controlling the narrative & woe betide any medic who contradicts it.

People should be hearing before they’re jabbed, the info on the expected chances of their dying. They might want to take their chances without the jab. Read their ‘logic’ at the link:

“Our ‘friends’ in the mainstream media have been too quick to tell us deaths are assumed to be only “coincidentally” associated with vaccination before all the evidence is in. This raises an obvious question: Is the assumption that the experimental COVID-19 vaccines are never the cause of death scientifically justified or is it a symptom of bias?”
principia-scientific.com

This is a developing story.  Mainstream media pulls original story of Australian sailors on HMAS Sydney suffering widespread adverse reactions to COVID19 vaccinations. Sanitized version refers only to “mild side effects” despite the fact the ship’s crew needed hospitalization.

So, whenever the mainstream media conspires to quietly ‘disappear’ web pages of a story it has already reported on you can bet something far bigger and worrisome is being covered up.

In this latest case, the UK’s Daily Mail yesterday pulled a story from their pages about adverse COVID jab reactions among the crew of an Australian war ship.

Direct from Australia, a valued contact told us by email: “Our health minister is still in the hospital from the day after he had his injection! Not a word about the navy hospitalisations.  What a way to take out a country’s military… In just one jab!” Our contact refers to the story earlier this week of Australian Health Minister, Gregg Hunt, who was taken seriously ill  in a “critical condition” after he received his dose of the untested, experimental vaccine. In a statement on Tuesday evening his office stated that Minister Hunt had: “been admitted to hospital with a suspected infection, he is being kept overnight for observation and is being administered antibiotics and fluid.”

corbettreport 474K subscribers SHOW NOTES AND MP3: https://www.corbettreport.com/?p=36846 We’ve all come across online fact checkers that purport to warn us away from independent media sites under the guise of protecting us from fake news. But who is behind these fact check sites? How do they operate? And if these ham-fisted attempts at soft censorship aren’t the solution to online misinformation, what is? Join James for this week’s important edition of The Corbett Report podcast, where we explore the murky world of information gatekeeping and ask “Who will fact check the fact checkers?”

“Joining me today is Dr. Andrew Kaufman to discuss a topic that, despite being rooted in facts, evidence and years of research, has been suppressed, censored and ignored by the entirety of the mainstream medical and scientific community.” 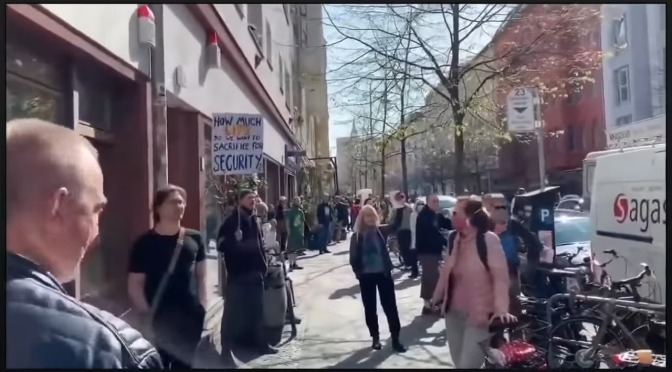 corbettreport
384K subscribers
SHOW NOTES AND MP3: https://www.corbettreport.com/?p=35994 Diane writes in to ask if there are any protests against these lockdowns anywhere. The answer is a resounding yes, but the fact that people aren’t hearing about these protests speaks volumes in and of itself. Join James for this important action-oriented edition of Questions For Corbett.
Photo: screenshot corbettreport video
RELATED: Here it is, the New World Order, as Trump hands over to FEMA (Executive Order 13603)

What in the world is actually going on? Document reveals plans, step by step. (Dana Ashlie)

corbettreport
Published on Sep 10, 2019
TRANSCRIPT: corbettreport.com/911whistleblowers/ As a janitor holding a master key to the North Tower of the World Trade Center on the morning of 9/11, William Rodriguez risked his life till the very moment of the building’s destruction helping those trapped inside the Towers to escape. But carefully curated from most mainstream reports on Rodriguez’ remarkarble story is an equally remarkable fact: This 9/11 hero is in fact a 9/11 whistleblower, someone who has contradicted the official story of the September 11th attacks from day one. This is his story.
via

Predictably, after the NZ Govt ignored our two men who walked the entire length of the two Islands with their concerns about environmental pollution & the poisoning of our whenua & kai, the media continues to take from the hand that feeds them & report only what will support a favourable public perception of the deadly poison 1080. I stopped following mainstream long ago. It is owned by around six corporations now & no prizes for guessing the ownership of those.

Our growing fascist corporatocracy is well armed with willing participants ie sold out journos. You can swap out NY Times in the image below for NZ Herald, Stuff and so on, they’re all pretty much the same. Whore media basically. 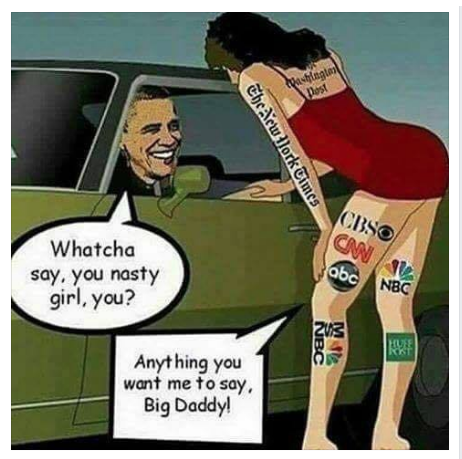 Journos don’t bite the hand that feeds them. Don’t believe me? My opinion is not new.

“There is no such thing, at this state of the world’s history, in America, as an independent press. You know it and I know it. There is not one of you who dares to write your honest opinions, and if you did, you know beforehand that it would never appear in print. I am paid weekly for keeping my honest opinion out of the paper I am connected with. Others of you are paid similar salaries for similar things, and any of you who would be so foolish as to write honest opinions would be out on the streets looking for another job. If I allowed my honest opinions to appear in one issue of my paper, before twenty-four hours, my occupation would be gone. The business of the journalists is to destroy the truth, to lie outright, to pervert, to vilify, to fawn at the feet of mammon, and to  sell his country and his race for his daily bread. You know it and I know it, and what folly is this toasting an independent press? We are tools and vassals of rich men behind the scenes. We are the jumping jacks, they pull the strings and we dance. Our talents, our possibilities and our lives are all the property of other men. We are intellectual prostitutes”.   READ MORE

Note what they’re not mentioning about 1080:

I could go on.
It is as much about what is omitted as what is told to you. Try and comment on those news items and see the control go into action.

The image below I found online (please advise if it’s yours*) …. it so graphically describes what words never could. Quite appropriately also is the colour of the feed trough contents. The same as that of 1080 & the illusory clean green NZ. Your Govt has done a great job of rebranding the deadly poison that is odourless & colourless & has no antidote. As NZ’s Dr Charlie Baycroft warned us recently, if you die from 1080 poisoning no one will know. 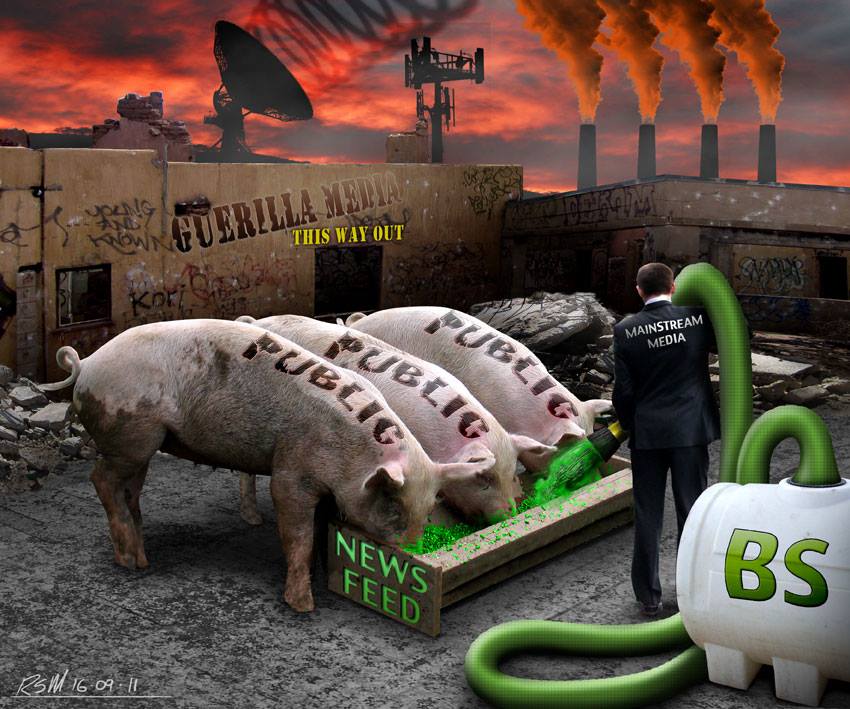 On the brighter side, the hikoi and protests on the 8th September have made an impact for sure. This is evidenced by the subsequent ramping up by mainstream of pro 1080 damage control.

A CONFIDENTIAL CHAMBER OF COMMERCE MEMO IN 1971 CALLED FOR A BIG BUSINESS MAKEOVER OF GOVT THROUGH CORPORATE CONTROL OF MEDIA, ACADEMIA, THE PULPIT, ARTS & SCIENCE

THE PURPOSE OF MAINSTREAM MEDIA IS THOUGHT CONTROL AND SUPPRESSION: HOW TO FIND THE FACTS BETWEEN THE PROPAGANDA

* Re the image,  please let me know if you decline permission to use it.

Most people who’ve learned to question will know by now that what is called ‘mainstream media’ (I call it lamestream) can no longer be trusted to inform you of news facts in an unbiased and truthful manner. The ownership of the media for starters is now down to around six corporations, from many times that say ten years ago.

Remember, corporations don’t have your best interests at heart. What we see and hear is carefully funneled to us … selectively at that. What you don’t get to see, just as important as what you do, creating the desired perception of reality to suit. You may not have been aware but during recent TPPA protests throughout NZ, the Herald reported  a few hundred protesters, when in fact there were 25K+. Currently then your best shot at getting to the truth of all news is to visit truth sites on the internet. Your daily newspaper is just not going to do that for you. Unless of course you are only wanting data on last week’s dog trials and some gardening and culinary advice.

To complicate matters further, according to this video, you will see how what you learn is manipulated to an even more devious degree with even more refined technology that can artificially create the reporter’s body language for you … and more …

https://youtu.be/YKkuWX406q4 I’m not even sure what to write for a description. What else can you say? It’s the Matrix.

We Need to Talk about Sandy Hook: https://www.youtube.com/watch?v=IxTaf… 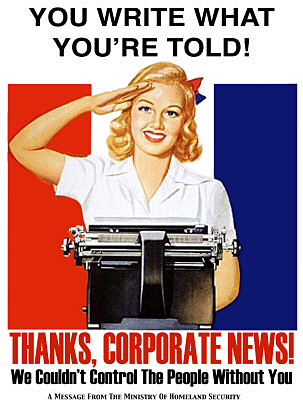