Increasingly we are hearing of these scenarios where democracy is shut down in our local District Councils. Time and again, people are dismayed at the fact their seeming representatives whom they elected at LG elections … are straying off onto their own agenda and refusing to listen to the voice of the people. This is a rot that has set in over recent years and seems to be getting more fascist by the day, witness this event at the Auckland Council over the spraying of glyphosate and other chemicals in public places. In the Rangitikei a few of us here have had the same quiet battle where any leaning towards non-chemical weed control is silenced, as regards policy at least. Currently we have less chemical control in town than we used to have however the DC remains adamant glyphosate is quite harmless. Another issue regarding larger than stated or consented leachate quantities being pumped into our WWTP that had come to light via the public, taken then by the Community Committee (the conduit between the public and the DC)  to the DC, and simply then not accepted by the DC. Subject closed in effect! (The Community Committee it appears discusses public toilets a lot and is simply an exercise in window dressing).

All that aside, what is happening to our DCs then?  They are right now looking very fascist. They have little resemblance to democracy and yet folks are still treating them as such. Expecting democratic results and finding they are everything but. They merely give the illusion of democracy. Since running this website I’ve had feedback from locals about having gone to Council over issues that concern them to little effect. They are really great at fobbing you off. It appears, and many of us didn’t know this, that you need to ask that your comments be noted. You cannot simply assume they will be. In much the same way as when I presented glyphosate research to the RDC and later learned I’d failed to ask if the Council would get back to me on the issue. Fortunately a member of the CC was seated beside me and told me the said info, and fortunately also, a Cr asked for the issue to be put on the agenda for next meeting. Had she not, the issue would have disappeared into the black hole forever. And I left wondering what they ever did with it. It would’ve been precisely NOTHING. The ever intriguing machinations of Local Government. Finally, keep in mind that your local DCs are in fact companies. This explains a whole lot. Companies are about profits not people.

On Friday 13 May 2016 legitimate debate was shut down by Auckland Council in a ruthless manoeuvre to keep concerns about carcinogenic chemical use in the city out of the public eye and off the agenda.

Council was finalising and voting through the 2016/17 Annual Plan budget.

Submissions from the public and Local Boards calling for the restoration of funding for non-chemical methods in parks, and the elimination of all use of the toxic herbicide glyphosate from public places had been ignored and omitted from the budget.

An amendment was raised with Mayor Len Brown the previous day to address this by two councillors, Wayne Walker and John Watson, but was not presented by Mayor Brown until the end of the budget deliberations.

Immediately, under a point of order, Member John Tamihere objected saying it was inappropriate and was being raised too late; Mayor Brown did not defend it; and the Chair, Cllr Penny Webster agreed it was out of order and rejected the amendment.

All this in spite of an impassioned plea by Cllr Watson for it to be heard and noting the attendance of members of the public who had sat through over six hours of  debate to hear and support this amendment.  Chair Webster shut Cllr Watson down as well as Cllr Walker who tried to clarify the situation and the reason it was appropriate to be heard.

Pleas to the Chair and Mayor Brown, were all to no avail. 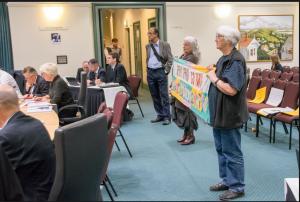 In an act of defiance those of us still present refused to be silenced.  When Council resumed after a short adjournment to rubber stamp the budget, I pleaded with the Mayor to use his prerogative and hear the amendment. Read more:

Be sure to check out our Local Government Watch pages. Sign up or follow to see more developments on the local government front. We are watching closely.