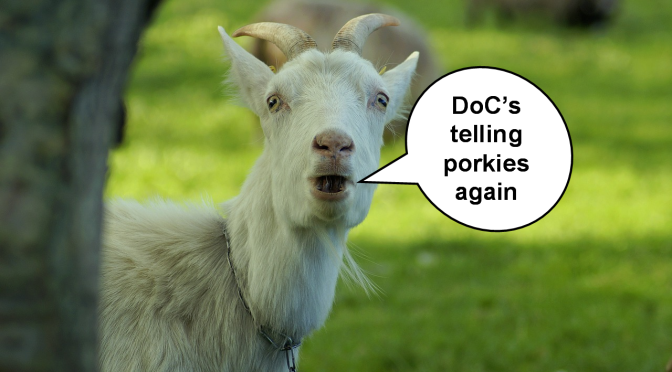 JUST ONE “THREAT” FROM ANTI-1080 PEOPLE REPORTED TO NZ POLICE BY DoC IN THE PAST 12 MONTHS! (Someone dressed in a DoC uniform – how is that a threat?)

“We now have an updated OIA response from NZ Police, informing us of how many further reports they have received since October 2018, to the 8th August 2019. Nearly one whole year has passed. How many reports of so-called threats to DoC from anti-1080 activists?

This single incident apparently involved someone dressed up in a DoC uniform, and was dismissed by the Police because it was “not a direct threat to DoC workers”. – No to 1080 Use in NZ

Director-General of the Dept of Conservation, Lou Sanson, would have the public believe that his staff are under enormous threat – from anti-1080 activists in particular – and in May’s Budget the department received an $11 million boost in funding for security:

What Sanson is not taking into account is the effect this scare-mongering is having on his own staff. I have received a report that the family of one female DoC worker is relieved when she arrives home at night unmolested. I am sure this is not an isolated case. He should be ashamed of himself, using this unfounded propaganda to terrify his workers and drum up support for his poisoning regime.

*Ongoing lies from New Zealand’s Dept of Conservation, but our peaceful protests continue.

We have reported in the past year or so about the increasing claims in the media from people like Lou Sanson, Director-General of the DoC and Nicola Toki, DoC’s ‘Threatened Species Ambassador’ that ‘anti-1080 activists are dangerously out of control’, ‘have gone feral’ and even ‘ are repeatedly making death threats to DoC staff’.

On 31st August 2018, we exposed the truth about these lies. We reported the response to an Official Information Act to the New Zealand Police, which asked ‘exactly HOW MANY threats of violence towards DoC staff had been recorded from so-called ‘anti-1080 activists in the past 2 years?’ and perhaps more importantly, ‘how many of these were being upheld?’

The answer, back then, was six. Between March 2016 and March 2018 there were a total of only six reports of threats to NZ Police, of which, ZERO were being progressed to prosecution.

From March up to October 2018, how many MORE threats to DoC were reported to the Police? After all, there was (according to TVNZ in Sept, 2018) a “sharp rise in threats to DoC staff”. Numerous media articles attempted to alarm the public about the ‘dangers’ of ‘anti-1080 activists’. The commencement of a costly contract with the private security firm, Thompson and Clark (April 2018) added to the perceived seriousness of the situation. Journalists like Tom O’Connor wrote opinion pieces with headlines like ‘ Anti-1080 protesters’ threats to human life inexcusable’. But where is the evidence that should support these claims?

OIA responses confirmed that between March to October 2018 there had been THREE so-called threats reported to Police. The same, on average, as the previous two years. Reported incidents included a threatening phone call, and a note left on a DoC vehicle.

We now have an updated OIA response from NZ Police, informing us of how many further reports they have received since October 2018, to the 8th August 2019. Nearly one whole year has passed. How many reports of so-called threats to DoC from anti-1080 activists?

This single incident apparently involved someone dressed up in a DoC uniform, and was dismissed by the Police because it was “not a direct threat to DoC workers”.

To be clear, there has recently been one well-publicised single prosecution. As far as Admin of the page are aware, the man, Gregory Buchanan, was unknown and unconnected to any persons or groups associated with the long-standing, peaceful protests against the use of aerial poisons in New Zealand. Mr Buchanan’s motives were unclear, but the media reported: “A man has been sentenced to five years in prison after sending threatening letters to Department of Conservation (DOC) staff over 1080 poison.[…]. In a statement, DOC’s Director General Lou Sanson says he hopes this sentence will serve as a deterrent for others. Mr Sanson says anti-social behaviour and threats against DOC staff have grown over the past year from people who oppose predator control using 1080 to protect our indigenous forests and wildlife. The threats have moved beyond social media trolling to the targeting of vehicles, property and people. Staff and contractors have been followed, filmed, assaulted and threatened.” (1NewsNow. 7 June 2019).

But where is Mr Sanson’s evidence for these claims? Who is it that needs a ‘deterrent’? As we’ve reported here previously, even DoCs own records do not support these claims. The claims of threats are utterly false. This begs questions such as: Why are DoC so obsessed with this fantasy of trying to be seen as a victim? And, perhaps more importantly, WHY have DoC recently been allocated millions of extra dollars of taxpayers funds to ‘protect themselves’ against this self-invented danger?

This Fake News must end and our New Zealand Media must be held to account for constantly adding to this dangerous propaganda. 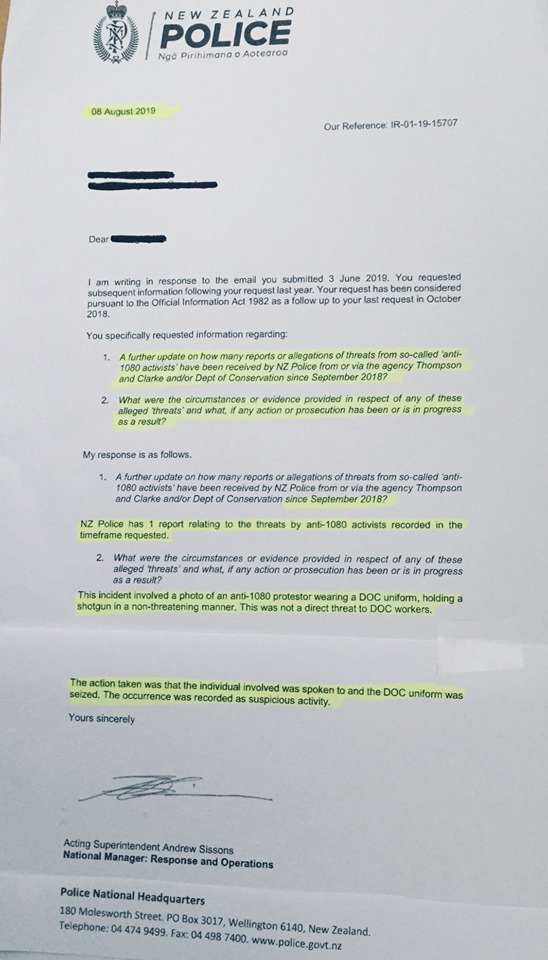 THREATS ACCORDING TO THE MEDIA: 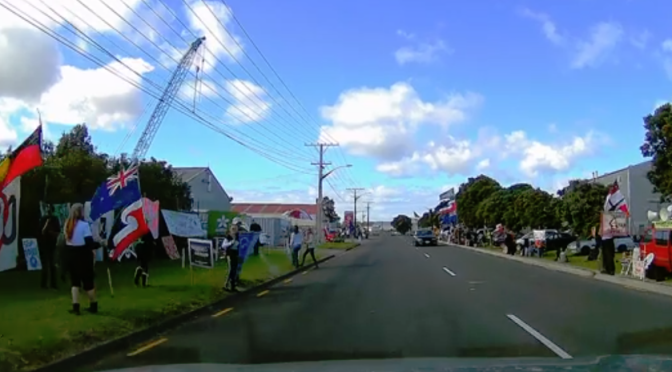 Whanganui is the scene of health concerns regarding 1080 that were raised by the late Dr Peter Scanlon over a decade ago and which have never been fully investigated by the authorities. He said in a submission in 2010:

Given the “scientific ignorance” of those who proclaim human safety when doing aerial drops near water supplies in the West Coast, Whanganui, Coromandel, Levin, Hutt Valley and other regions of New Zealand and the real lack of safety data, especially for NZ’s most vulnerable human populations, our unborn, young and old and those with chronic illnesses, one really must question whether it is ethical to use such a poorly studied chemical from a human health risk perspective. The native flora & fauna are replaceable. TB ridden cows are replaceable but the future health of our children & our most vulnerable is not.

“I nga wa o mua” − The past informs the present. ” Foresight should be sought as hindsight is dearly bought”

Thanks to Stewart Shand for the video

Environmentalists who protested recently against the slathering of the Class 1A Ecotoxin 1080 all over our once pristine environment (contaminating/poisoning our food, air & water) are not going away any time soon.

More than 200  gathered in Whanganui recently (1/5/19) to make known their concern for the welfare of both people and the environment. As you’ll see below in Carol Sawyer’s article, poison is big business and it’s expanding & set to be privatized.

Firstly though, Whanganui is a location of concern that the late Dr Peter Scanlon brought to the attention of NZ authorities regarding a cluster of health concerns following an aerial 1080 drop …

“A concerned Maori woman contacted me and presented to the Waitangi Tribunal evidence for the Whanganui Inquiry last year her concerns that 1080 may have been implicated in causing a cluster of miscarriages, stillbirths and congenital malformations to the children of pregnant Maori women following aerial drops and raised the question of bowel cancer in some adult Maori being possibly linked to environmental 1080 exposures through contaminated food and water sources. The current scientific gaps which the ERMA 2007 reassessment failed to address and assumptions based on out−dated or poorly studied science for human risk considerations cannot exclude the possibility of 1080 having such adverse health effects in Whanganui or other NZ rural communities The current medical system cannot easily investigate such concerns.”

Read more about Dr Scanlon’s concerns at this link:

Most importantly, as he says in the video clip in that article:

“Where are the cancer causing or carcinogenicity studies? … there aren’t any;

Where are the reproductive studies, particularly focusing on female eggs? … there aren’t any;

Where are the developmental studies, early exposure to brain, immune system? … there aren’t any;

Where are the long term chronic exposure studies looking at mitochondrial DNA content and mutation rates? there aren’t any.

There’s a lot of doubts about this substance, it’s dangerous.”

As far as I know there has yet been no investigation into Dr Scanlon’s concerns. We need to be asking ourselves, ‘why not?’ We need to be asking our authorities, why not? Why are they not sharing the same concerns this good Doctor voiced about the health of NZ citizens? About vulnerable pregnant women’s exposure to 1080 when it’s clear there have been NO LONG TERM STUDIES PROVING ITS SAFETY for them & their unborn?

In addition, as retired Doctor Charlie Baycroft has told us over and over, 1080 kills people, and if you die from 1080 poisoning, nobody will know because the authorities are bullying his profession not to test for it. Take note and peruse our Suspected Poisoning page.

Finally, Carol Sawyer’s article below outlines the history of  1080 suppliers in NZ & elsewhere

Until mid-2018 this was the only place that manufactured 1080 baits in New Zealand. Now the NZ government is set to privatise everything, which is even worse news !

Mid-2018, Pest Control Research Ltd (PCR Ltd) in Rolleston near Christchurch, was given consent to manufacture 1080 baits. The first baits it produced were used to poison the Hope and Cascade River catchments in South Westland in August, 2018.

Now the Dept of Conservation’s “Battering the Birds” programme is using 50% baits from PCR Ltd and 50% from Orillion.

ROLLESTON PEOPLE, ARE YOU AWARE OF THE RISKS OF TOXIC DUST DISPERSAL FROM YOUR LOCAL 1080 POISON FACTORY?