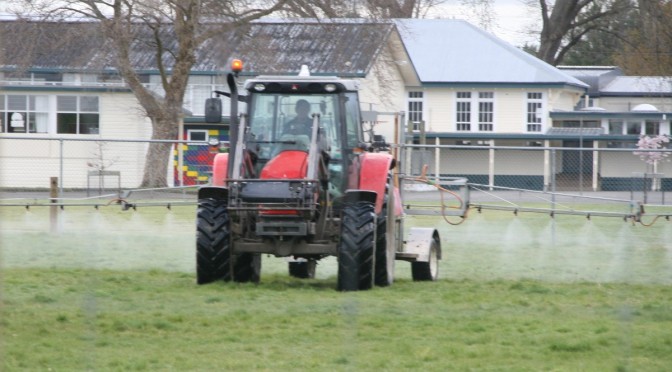 Farmers, local councils, schools, people in general slather everything in glyphosate (found in Roundup & most other household herbicides). That’s NZ’s no. 1 choice for keeping everything neat & tidy meanwhile, their health is a silent ticking cancer timebomb. Generally folk won’t read the research, they don’t want to know. They’ve been told it’s safe, end of story. (See our Glyphosate pages on that one at the menu). There are 80-100,000 chemicals in our environment says Dr Watts many (most) of which have never been tested adequately for safety around humans let alone the rest of the ecosystem.  This is thorough (yet shocking) info. I phoned Forest & Bird one day to alert them that one of their small reserves was being literally hosed with glyphosate, assuming they were into protecting birds & forests. They didn’t even know what it was! The image above was captured in NZ.  Educate yourself & speak up against its use.

You can buy this on DVD here: http://www.thevinnyeastwoodshow.com/dvds.html
Real environmentalism is about keeping our air, food and water clean. Our planet is now awash with pesticides and we’re all getting sick because of it, regardless of how you feel about climate change or deforestation, pesticide contamination is a far greater danger and yet it is ignored by mainstream environmentalists. Why? I filmed and edited this presentation purely out of my personal admiration for Meriel Watts and her tireless efforts to bring the explosive yet little known truth about pesticide contamination to the people. Vinny “MR NEWS” Eastwood