This post on changed laws in the US reminds me of NZ’s situation with 1080 that allows the long slow cruel death a vet has described as 2+ days of slow electrocution. The NZ authorities tweaked the Animal Welfare act to exempt the spreaders of aerially dropped 1080 poison from prosecution for cruelty. Same thing really isn’t it? Cruel but it’s deemed ‘okay’ because they are killing off everything non native for the biodiversity program we were signed up to under Agenda 21 now Agenda 2030. A truly ‘sustainable’ (not) practice. Unless of course it’s your pet dog, cat or other animal. EWR

“According to The Washington Post, the PACT Act “outlines exemptions for humane euthanasia; slaughter for food; recreational activities such as hunting, trapping and fishing; medical and scientific research; ‘normal veterinary, agricultural husbandry, or other animal management practice’; and actions that are necessary ‘to protect the life or property of a person.’”

Of course animal cruelty to dogs and cats by private citizens should be dealt with severely. But what about the billions of animals tortured each year on America’s factory farms? Or how about the tens of thousands of animals, including dogs and cats, who are tested on and mistreated in laboratories?

Can we actually say we’re cracking down on animal cruelty when we still allow SeaWorld to keep cetaceans captive and force them to perform? Or permit insanely cruel practices like fur trapping and bow hunting?”

This is a heart rending story. And one where surely insanity prevailed. Where did common sense go?

A Darfield family asked DOC not to take blood from their two 43-year-old kea, Casper and Stumpy. They did – and the birds were found dead less than 24 hours later.

A Darfield family blames the Department of Conservation (DOC) for the death of their beloved kea Casper and Stumpy.

The endangered alpine parrots have been part of Ron Stewart’s family since 1977 – but on Saturday morning he found them dead on the floor of their aviary.

Less than 24 hours earlier, a DOC ranger and veterinarian took blood samples from the birds despite Stewart pleading with them not to. 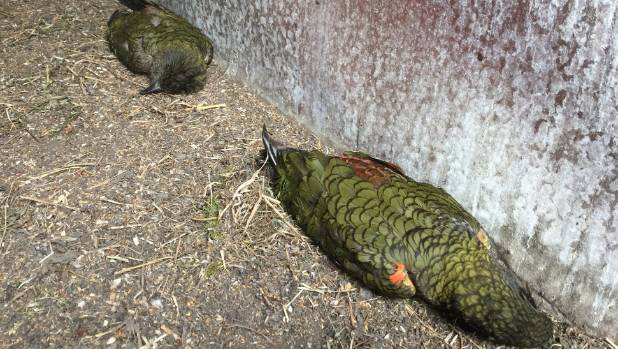 Kea Casper and Stumpy were found dead in their aviary on Saturday morning less than 24 hours after DOC staff took blood and examined the birds.

DOC staff, “shocked” by the birds’ “unintended and deeply concerning” deaths, returned to uplift them for a necropsy on Monday. They were ordered from the property.

The birds, thought to be about 43 years old, were given to Stewart and his late wife Dawn, an internationally renowned parrot breeder, by DOC’s predecessor, the Wildlife Service,  in 1977.

Casper had a head injury and Stumpy’s leg had to be amputated. They were unlikely to survive in the wild.