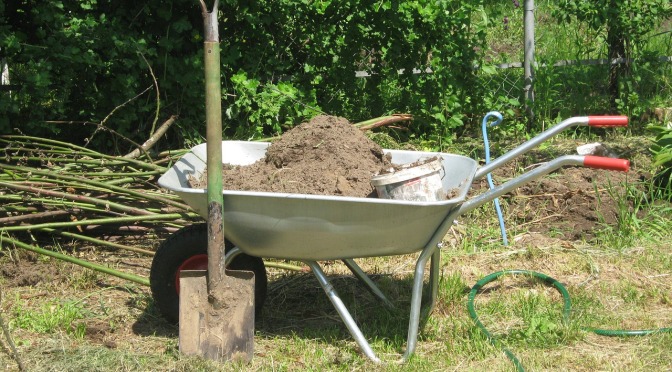 This week I received two emails which maybe of interest to some gardeners. The first was from a gardening couple, which read:

Hi Wally, Your advice and weekly email’s worked great. I got first in the Veggie Section and my wife won in the Rose categories. Jerry.

What can I say? If you use natural products that enhance the soil, giving the plants all the possible minerals that they may need to be healthy and stop using chemicals that are harmful to both soil, plants and yourself.

Over the years I have received a few similar stories about how gardeners have turned their gardens into award winners by simply observing and using the above information.

The second email is of concern this time of the year and it read;

Hi Wally, I have a problem with a brown beetle infestation. I was finding the leaves of my newly planted plum trees and almond tree were getting stripped bare almost. I wasn’t sure what it was but think the culprit is this brown beetle.

I have since found hundreds (literally) in one of my raised beds and quite a few wherever I have placed the garden mix I bought a month ago.

Is there something I can do to get rid of these beasties? They are now attacking my raspberry plants and feijoa trees. Because they are in the soil – and potentially quite deep (some of them were 20cm deep) – I’m not sure how to fight them. Please help!

The writer sent me an amazing photograph which shows hundreds of these brown beetles drowning in a container of water, along with photos of her plants badly damaged.

The beetle is the Grass Grub beetle and this is the time of the year that they emerge from pupating deep in the soil to feast on the foliage of a number of plants, mate and lay eggs back in lawns for future generations.

In my first book, Wally’s Down to Earth Gardening Guide, I suggest a trap to aid control of these pests.

Here is an extract from the book:

‘Grass grub adults emerge in October, and are active until about mid-December, depending on weather conditions and exactly where they are in New Zealand. The cooler the temperature, the later they emerge.

The adults will start to emerge in mild conditions, when the soil temperature reaches about 10 degrees they then mate, fly, eat and lay eggs in the short space of time between dusk and early evening.

As they tend to fly towards light, you are most likely to know they’re there when the flying beetles hit your lighted window panes.

This very attraction for the light has become one of our best weapons in controlling the pest in its adult stage. You can set up a grass grub beetle trap by placing a trough, such as the one used when wall-papering, directly underneath a window near a grassed area.

Fill the trough with water to about two-thirds of its capacity, then place a film of kerosene on top of the water. Put a bright light in the window, the beetles fly towards the lit window, hit the glass and fall into the trough.

The kerosene acts as a trap, preventing the fallen beetles from climbing out.

You can extend this method to areas away from the house by using a glass tank, such as might be used for an aquarium.

Place the empty tank into a tray containing several inches of water (and the kerosene), and position a light inside the glass tank.

By adding a sheet of ply or something similar over the top of the tank, you will ensure that the light shines only through the sides of the tank above the waiting water and kerosene.

It is better to use a dome-shaped battery-powered light rather than an ordinary torch for this job as the bigger light makes the trap more effective.

If the tray and tank are raised off the ground and placed on something like a table, you will get an even better result.

However you set up your beetle trap, this is a very good method to dispose of the pests. Simply get rid of all the beetles caught the next morning.

Run this system (call it Wally’s Grass Grub Beetle Catcher, if you like) from just before dusk to about 2 or 3 hours after sunset.’

Spraying the plants that are been attacked with Wallys Super Neem Tree Oil will help to also control the populations.

This should be done late in the day after the sun is off the plants. When a beetle chews on a leaf they get some Neem into their gut and that shuts off their ability to eat.

With the likelihood of more beetles emerging every day it is an on going battle over the next month or two.

Another way is to go outside just after dark with a torch and check your plants for beetles.

If you see a good number on any plant then a spray at that time with Wallys Super Neem Tree Oil and Wallys Super Pyrethrum added, sprayed to hit the beetles rather than the plant itself.

Another very good natural spray to use late in the day is a solution of Wallys 3 in 1 for Lawns.

This is a combination of Eucalyptus oil and Tea Tree oil, nice to use and deadly on pests.

If you repeat your nightly spraying and use a light trap also, then you will make a big dent in the grass grub beetle populations and thus suffer less damage to your plants and lawns.

The season is still poor weather wise which helps keep insect populations lower than normal but care should be taken with your potatoes and tomatoes by placing Neem Tree Granules on the soil in the root zone and spraying the plants occasionally with Wallys Super Neem tree Oil.

Visit your local garden center to obtain some good ideas for Xmas Presents.

New Zealand Bill of Rights Act 1990. Part II of the Act covers a broad range of Civil and Political Rights. As part of the right to life and the security of the person, the Act guarantees everyone:

2 The right not to be subjected to torture or to cruel, degrading, or disproportionately severe treatment or punishment (Section 9)

Furthermore, the New Zealand Bill of Rights Act 1990 guarantees everyone: Freedom of Thought, Conscience, and Religion.
This includes the right to freedom of thought, conscience, religion, and belief,
INCLUDING THE RIGHT TO ADOPT AND HOLD OPINIONS WITHOUT INTERFERENCE (Section 1)