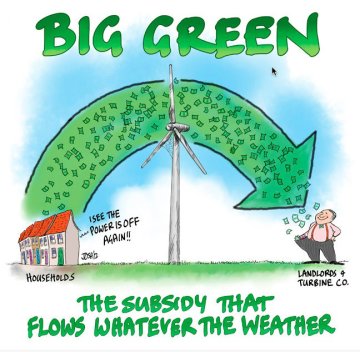 Some electricity consumers may feel like muttering obscenities if they see the figures. Meanwhile the BBC insists renewables are now cheaper than coal.
– – –
The Global Warming Policy Forum has condemned what it called the “obscenity” of windfarm subsidies and has called for a complete rethink of energy policy.

GWPF research has shown that just six offshore windfarms are now sharing £1.6 billion pounds in subsidies between them every year.

Three receive annual subsidies of over a quarter of a billion pounds each year.

The level of subsidy is sufficient to cover the construction cost of these windfarms in just six or seven years, meaning that future payments will represent almost pure profit for the operators.

The cost of the Contracts for Difference regime is accelerating, and rose by…