A collapse of our food supply, note, not theirs. They are busy preparing their bolt holes and places of refuge for when the SHTF. These are the ‘sustainable’ lie people who pledged their plan would make things better on planet earth.

A video here from Ice Age Farmer on Youtube. If you listen at 4 minutes in you will see Bill Gates (current promoter of depop via his $$$vaccines) telling us about an epidemic … ‘either naturally caused or intentionally caused’ … so they play us some more. Firstly we have the NZ vaccinologist with her supposed slip of the tongue, a 27 years prior pandemic prediction by the Simpsons, a book with a prediction of the same some 39 years prior and now we have Bill with ‘intentionally caused’ pandemics. I’m not making this up. Please do watch the entire video, it contains important information.

See the curious statement made below here in ’96. That was the era straight after the Agenda 21 rollout (’92). 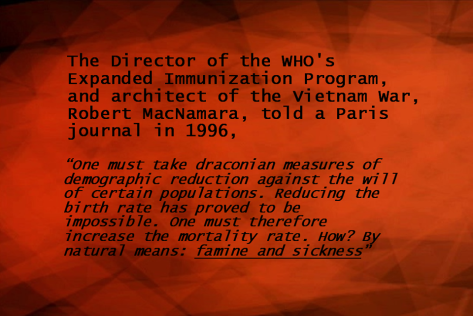 These people are evil.

Bill Gates owns patents on the virus and censorship of social media is recommended so only the right story is out there.  This is the man who ran a pandemic simulation weeks before the outbreak. We also had more than 110 countries assembling weeks prior at the place of the origin of this manufactured virus conducting their military world games. They play loose with people’s lives because they want the world’s population down. And it does not need reducing at all… ‘most’ is just not enough for them. There is ample landfor everybody. Read Kevin Cahill’s exposé of that. He has calculated there is enough habitable land on the planet for every single soul to subsist on. He also concludes that landlessness is the distinguishing feature of world poverty. Only a very small percentage (15%) of the world’s population owns the land. This issue he believes, that of land ownership, is ‘almost universally the subject of deceit by those in authority behind it’. I’ve digressed but nevertheless this is important information we have not been privy to. There is much more info that is important in the video particularly about the food supply … a must watch.

Note folks, they are not a part of the ‘required’ population reduction either … they stay, it is you who goes.

10 thoughts on “Bill Gates discusses ‘intentionally caused’ virus outbreaks, playing us again as he and his billionaire friends ‘predict’ a collapse of our food supply”