“So, Massey, couldn’t work out that “FROTHY PINK FLUID” is consistent with 1080 poisoning?”

So, as expected, the Department of Conservation has come out with porkies, again, trying to divert attention from its recent aerial operation and the hundreds of poisoned rats, and other animals that washed up on West Coast beaches. Drowning they say. Ha! Is DOC not aware that rats are great swimmers? They even have the tag name Water Rats. They don’t drown by accident or by Pied Piper fantasy stories, made up by desperate DOC staff.

The pathology report for the weka that was found dead, released this week from Massey (known for its creative alternatives to poisoning incidents – like the sea slugs that poisoned many dogs at Auckland’s Takapuna Beach after the aerial poisoning operation across Rangitoto Island, near Auckland) shows that the endemic bird died with “BOTH LUNGS EXUDING FROTHY PINK FLUID”!!!!

The weka’s Pathology report from Massey is included, below.

The finding is typical of animals that die of 1080 poisoning. But no, in this case, and as expected, the findings were “unknown cause of death”.

So, Massey, couldn’t work out that “FROTHY PINK FLUID” is consistent with 1080 poisoning???

For Heavens sake, when will these govt organisations actually show some independence? Oh, that’s right, they can’t! There is NO independence when it comes to 1080 poisoning incidences in New Zealand.

RELATED: Over 5 years NZ$3 million has been approved by DoC alone to the eight main NZ universities – so how independent is their research? 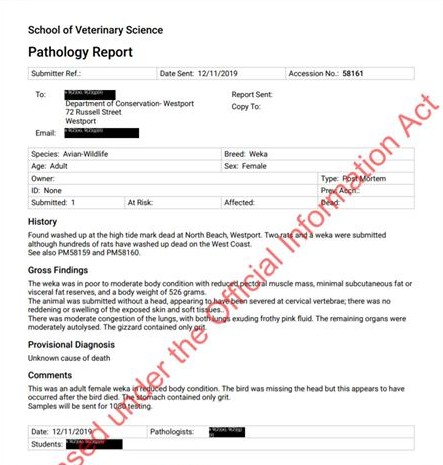 Just to remind DOC and Massey, here’s some photos of animals “EXUDING FROTHY PINK FLUID” after being poisoned with 1080 …