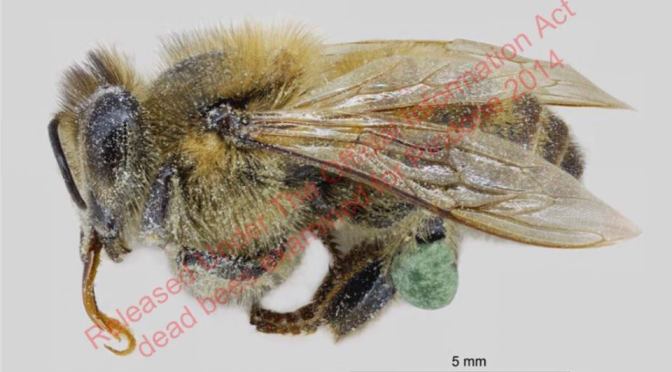 Commiserations also to the bee keepers. I know this is not good news for you & your income. I have already been told by one bee keeper (a reliable source) who wishes to remain anonymous, that DoC dropped 1080 near their hives & cost them thousands of dollars. They could find no successful avenue of redress against DoC, none at all. By all accounts it sounded very deliberate & were it accidental there should have been some kind of compensation or insurance one would think? All I can say is folk need to be aware and protect themselves by using the precautionary principle.

Evidence: POISONING bees and the Manuka honey industry. NZ’s Dept of Conservation try to wriggle around the fact that 1080 is an insecticide – but DOC even registered it as such in NZ as wasp bait. And here we have evidence of honeybees gathering poison. NZ has NO accredited test for 1080 in honey. Do you feel safe eating honey now? Tell DOC by email enquiries@doc.govt.nz

The highest concentration of 1080 detected in the honey was 15 ppb and subsequent tests showed a gradual decay down to 3 ppb after 59 days. The honey source that the samples were taken from would have eventually gone on sale after 16 weeks, hence there would not have been any detectable level of 1080 in the sale product, although under different circumstances, this time could be considerably shorter. Zero studies were done to see if the 1080 samples “lost” 1080 due to the toxin binding to the plastic sample pots – 1080 is well known for binding. What this could mean is the samples tested lower over time while the drums of honey remained high and were then sold.

8 thoughts on “Registered by DoC as a wasp bait, 1080 is being gathered by bees & NZ has no accredited test for it in honey”