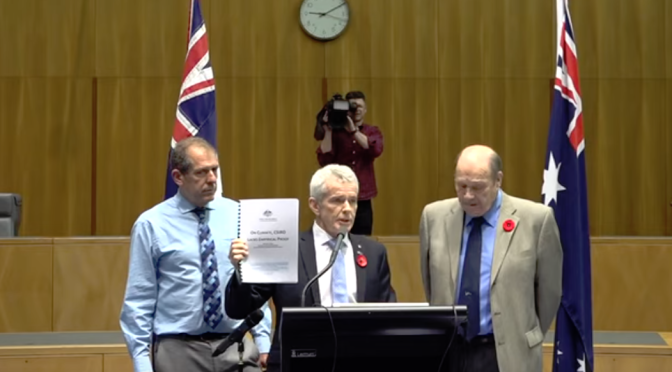 Thanks to reader Lucille for the link to the first video below. It’s a must see on the climate change scam. The good Senator has cottoned on to the scam & is doing his best to expose it for what it is. As is the custom at any challenge of the lies, the audience raise the conspiracy ruse & the anti Semitic one as well.  These are of course designed to lead the truth seeker away from the truth. It is why we are now facing full censorship of truth on the internet, with Google blocking truth sites. We also have book burning going on, libraries shutting, collections disappearing. The so called elite need a crisis to usher in their world government so exposing it for what it is makes a considerable dent in their credibility. As Mikhail Gobachev said, a New World Order is required to deal with the Climate Change crisis. Watch what happens to Senator Roberts & how he fares in politics from hereon in. He’s stepping outside the ‘instructions’ & boundaries politicians must stay within if they wish to remain in politics that is.

Further down is an additional video in which Dr. Nils-Axel Mörner  is interviewed on radio about his experience. He was former IPCC Chair for the Sea Level committee however his advice was ignored. He explains about the sea levels & as in the first video the false data that accompanies the whole scam.

SUBSCRIBE 1.6K
CSIRO: Today I released my report in response to CSIROs climate science claims, that were presented at the meeting held with CSIRO senior scientists on Monday 26 September 2016 in Sydney. The key findings of Senator Roberts’ report shows that CSIRO: 1. Refuses to state that carbon dioxide from human activity is a danger 2. Does not have empirical evidence proving that carbon dioxide from human activity effects climate 3. Have used evidence in their presentation that contradicts the empirical climate evidence. 4. Uses climate computer models that are neither appropriate nor recommended to be used to inform government policy In the Senator’s first speech to the Senate he stated, “Australians should be able to rely on the information from Australian government bodies and institutions [such as the CSIRO] but we can’t.” “Queenslanders, everyday Australians, have lost jobs, paid higher taxes, wasted opportunities, lost businesses and fritted away scarce resources… nowhere is this issue more important than in our resource rich Queensland, which stands to lose the most of all our states” he said to the Senate. Senator Roberts’ research has shown billions of dollars have been wasted on mothballed white elephants such as useless desalination plants. “Our team will now move our primary focus on how the devastating economic impacts of climate alarmist polices are affecting everyday Australians, including higher taxes, destruction of industry, removal of sovereignty and implementation of appalling control mechanisms limiting personal freedom,” “The ultimate goal of Pauline Hanson’s One Nation Party is to dismantle Australia’s obsession with green guilt and assist in restoring our country’s former agricultural, manufacturing and economic base,” he said. At a press conference to release the report the senator was flanked by a number of renowned scientists and researchers who have supported his findings into the CSIRO. Those supporting the senator at his press conference were Internationally eminent Canadian climatologist, geographer and environmentalist Professor Tim Ball, expert on the United Nations’ unfounded and politically motivated climate claims cited by CSIRO; American engineer, investigator and researcher Mr Tony Heller, internationally respected for exposing manipulation of temperature data by a small unit within NASA’s Goddard Institute of Space Studies and relied upon Australian scientist, engineer and inventor Mr Peter Bobroff who was awarded an Order of Australia Medal for his services to research and compiled the site reviewing CSIRO’s claims and presenting supporting data.
NOTE: below is the info from the original video posted here, left FYI. The channel by the way has been expunged from YT ‘due to violations blah blah blah’ … aka thought police.

SUBSCRIBE 19K
Australian Senator Malcolm Roberts Exposing ‘Climate Crisis aka ‘Climate Change Scam!
⚠️ Elections have consequences, the beginning of the end of the CO2 caused climate change lie has started in Australia. Dr Tim Ball has presented in the Australian Senate on how the trillion dollar scam has been perpetrated and who is getting the money. Anyone interested in climate politics will be rewarded for finding 30 minutes to watch a video full of truth and facts that cannot be ignored.
Tony Heller & Dr Tim Ball invited to the Australian Senate by Senator Malcolm Roberts
Australian CSIRO ‘Commonwealth Scientific and Industrial Research Organisation’ grilled over it’s constant lies and failed climate change predictions, Australia’s Bureau Of Meteorology, ‘BOM’ is also another Climate change propaganda machine, the biggest in the world for pushing this massive hoax, the BOM are on record for saying, “What we really need is more funding to study the effects of climate. .
Re-upload from: John Clarkson: YouTube.com/channel/UCAtiIJI-ISB47jcAZW_PxoA .
⚠️ Most climate crisis (“climate change”) activists deny and/or willfully ignore worldwide overt & covert #GeoEngineering operations causing (local) extreme weathers and are do not see that the push for “Global Governance” connected to UN #Agenda21 & #Agenda2030 “The Global Tax” agenda hijacking their “fight” with mass corruption, study: #ClimateGate … Mass rollout of #5G death-towers ☠️ everywhere is part of the A.I. Surveillance #IoT smart-grid to micromanage all humans to “Save The Earth” bs. .
Meanwhile the real reasons are not discussed: NWO Depopulation Agenda, crowd control, making Orwellian type dystopian society run by #PsychoTechnocrats inevitable.
The trillions of dollars/euros that is needed to “Combat CO2” (what plants breathe) is NOT spend on suppressed inventions another topic most “green activists” do not discuss! …They are used to PUSH a world conditioned for control-freaks to take over! (normalizing insanity!) . #JohnKuhles Founder #Stop5G Fb Group, Page & Stop5G.net 🦜🦋
🌳 . ⚠️’Extinction Rebellion Surveillance Agenda helping to PUSH the Mass Rollout of #5G Smart Grid! https://www.facebook.com/Stop5G/video… ~
The climate changes every day, that is a given … The “Climate Change” Scam (hoax) has to do with multiple bogus claims “who is doing what, where, how and how big and how often and how big is the effect of that” … “Global Warming Science” has been debunked & exposed not only scientifically but also proven to be a fraud done by corrupt people #ClimateGate … It all about how much power “Global Governance” should & could get and pushing the the “Global Tax Agenda” connected to even more Orwellian type of Government Surveillance. Law enforcers tracking “criminals” by NEW invented unconstitutional “Laws & Regulations” … They will and CAN call you a “criminal” losing your (privacy) rights because of that lame excuse. .
So in short: We have Hijacked Governments criminalizing solutions (suppressed inventions/alternative cures) and … legalizing crimes by creating new insane (unconstitutional) laws that are pushed by corporatism (lobbyists paying-buying out corrupt politicians). The Law Enforcers become more and more an extension of serving the Big Corporations and less the people’s interest. (…) Time to Unslave Humanity! .
“Global Warming” Scare predictions in the 80s & 90s turned out to be a HOAX …. all part of NWO UN ‘Agenda 21’ pushing for ‘Global Tax’ & ‘Global Governance!’ … but the rise of (man made) extreme weathers worldwide is real … so it is GIVEN that there is “climate change” … like kicking an open door … when Solar Storms & Solar Winds coming from our Sun has an huge effect on ALL planets in our Solar System … centuries of ALL planets had & have planetary cooling or warming due to the Sun Effect has been PROVEN over and over and over and over again GOT THAT? So know why they playing with our perceptions! … and Yes Covert Man Made Extreme Weathers (Weather Wars aka Weather Modification are also Real!). .
~Covert NATO run (above nation laws) SRM ‘Solar Radiation Management … Geoengineering Projects – Aerosol Crimes – Chemtrails – Secret Weather Modification Wars (study the declassified government hearing on this topic) – Stratospheric Aerosol Injections – #GlobalDimming etc. etc.

Alan Jones and Peta Credlin expose the lies being promoted by the by the IPCC. Former IPCC Chair for the Sea Level committee Dr. Nils-Axel Mörner opens up to Alan Jones and completely spills the beans on how the world is being lied to by the UN and the climate change activists. Solar activity is currently the key contributor to any climate variation. Copyright © Jones & Co, SkyNews, 2GB

For further information on this scam please see our climate pages. These men are not alone in their deductions. You could also search ‘climate’ in the categories drop down box to the left of the news page for further articles on climate.