Note, whilst the NZ news media publishes this ridiculous advice, your authorities mandated to protect you from the poisons have absolved themselves from all responsibility with a disclaimer in their documentation … should you happen to touch any poisoned game in your travels (more to come on that). First it’s safe, then it isn’t. Just whom do we believe these days? Maybe start with the data sheet?   sds1080pellets 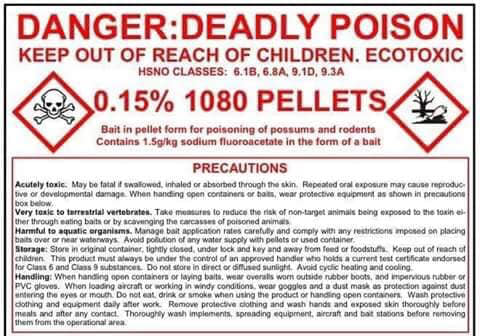 “May be fatal if swallowed, inhaled or absorbed through the skin”

Read Herald’s article below (emphases are mine)…

A group of forestry workers were upset earlier this month after a helicopter dropped 1080 poison baits in the Waimarino Forest where they were eating their lunch.
The drop, by Taupo company Epro Ltd, was intended to stay at least 100m from the three gangs working in the forest.
The men’s boss, Ray Flavell, said the helicopter may have been in the wrong place.
None of the baits touched the workers.

However Epro operations director Ian Roberts said if they had touched or even eaten one of the baits it would not have harmed them.

“There’s only 800g of poison per tonne of bait. I weigh 75kg and I would have to eat 20 to 22 baits in order to have a 50 percent chance of being killed.”
The baits were made from carrot pieces of approximately 7g each, dyed green. One or two of them was enough to kill a possum.
Forestry worker Terrence Mcleod said he and two others were eating their lunch in a clearing about 5km from the Pipiriki Rd at about 12.30pm on October 1 when a helicopter flew across about 150m overhead. One of the men, John Ratima, took photos of it.
The men had been told the aerial operation was happening, but Mr Mcleod said they didn’t know when.
“It was quite shocking. We were disappointed that they didn’t have any thought for us.” Mr Flavell said he had told the men the operation was happening that day.
The group kept working until 4pm and then knocked off and had a good wash. They wondered if they should also have a medical check for any ill effects from the poison.
Mr Roberts said there was no need for this. He said his company had given Mr Flavell information packs to hand out to his workers, packs which would have allayed their fears.
Mr Flavell said he had never received any information packs. The manager of the forest on behalf of Winstone Pulp International, Keith Wood, said the baits were dropped over 3800ha of forest.
The timing was chosen because it was hoped the baits would kill not only possums but rats and mice and the stoats that fed on them.
A good stoat kill would give any kiwi chicks hatched in the forest a six-month opportunity to grow big enough to defend themselves and greatly improve their chances of survival.
The baits were screened to remove smaller pieces which might be eaten by birds.
“There shouldn’t have been any people working under the actual drop. It would have been dangerous, and certainly not the intention of the operation,” Mr Wood said.
Winstones had already apologised to the men, Mr Mcleod said yesterday. 1080 was a necessary evil, in Mr Wood’s opinion.
“It’s still one of the more practical and cost efficient means of dealing with possum control. Because of the terrain that we are working in the use of ground-based trapping and poisoning is difficult.”
Keeping people safe while using the toxin was “a balancing act”, he said.
The Epro operations director Ian Roberts said the baits were distributed at a rate of one every eight to 10 square metres or 2kg to 5kg per hectare.
They were treated with a deer repellent substance so deer would not be killed.
“Little pigs about the size of a cat can be killed. But the big ones, about 40kg to 50kg, detect the presence of poison and they vomit it up.”
Dogs could be killed, however, by eating poisoned possums. For a human adult even eating one bait (though it would be foolish) would have no ill effects.
However 1080 continued to be an emotional issue, Mr Roberts said, especially for hunters angry about the deaths of their dogs or their game animals.

And this is not a one off occurrence going by other conversations I’ve read in social media. Dropping baits where they shouldn’t be dropped is not an uncommon occurrence & frequently people are taken by surprise as these forestry workers were. And so continues Waikato Regional Councilor Kathy White, commenting on the above article:

“And less than an hour from me, in ANOTHER block of forest north of Taupo, exactly the same thing happened this week with the same pest contractor. Baits were dropped while forestry workers were on the job. Some of the workers didn’t know what the bits of carrot were, and hadn’t been warned about the dangers of taking bits of 1080 bait home in the tread of their boots to their kids and pets. What are the requirements in terms of informed consent to working in the middle of a 1080 drop? I hope the foreman of the site has reported this recent debacle to Worksafe and to HScompliance@epa.govt.nz”

WHY ARE PEOPLE SO CONCERNED ABOUT 1080?

A must watch also is Poisoning Paradise, the doco made by the GrafBoys (banned from screening on NZ TV, yet a 4x international award winner). Their website is tv-wild.com. Their doco is a very comprehensive overview with the independent science to illustrate the question marks that remain over the use of this poison.

Check out also 1080science.co.nz for the independent science.

6 thoughts on “As outraged forestry workers are exposed to deadly aerially dropped 1080 poison pellets, Epro operator advises they are safe to eat!”