With the recent revelations that a 1080 storage shed at Haast, South Westland, was invaded by floodwaters last month, it is surely well past time to look at this lax situation.

In Levin, in January, 2018, a building owned by the Horizons Regional Council, and used for 1080 bait storage, caught fire :

“Controversial pest control poison 1080 was stored in a Levin depot that was burgled and torched last week.

Horizons Regional Council chief executive, Michael McCartney said “…all run-off associated with putting out the fire was contained onsite and there are no environmental or health concerns”!!!!

Yet the attached letter from Orillion, the NZ government-owned factory in Whanganui that manufactures 1080 baits, states clearly:

“The burning of products containing even low concentrations of sodium fluoroacetate (1080) may release toxic hydrogen fluoride gas of sufficiently high concentration to cause a danger to humans in the vicinity”. 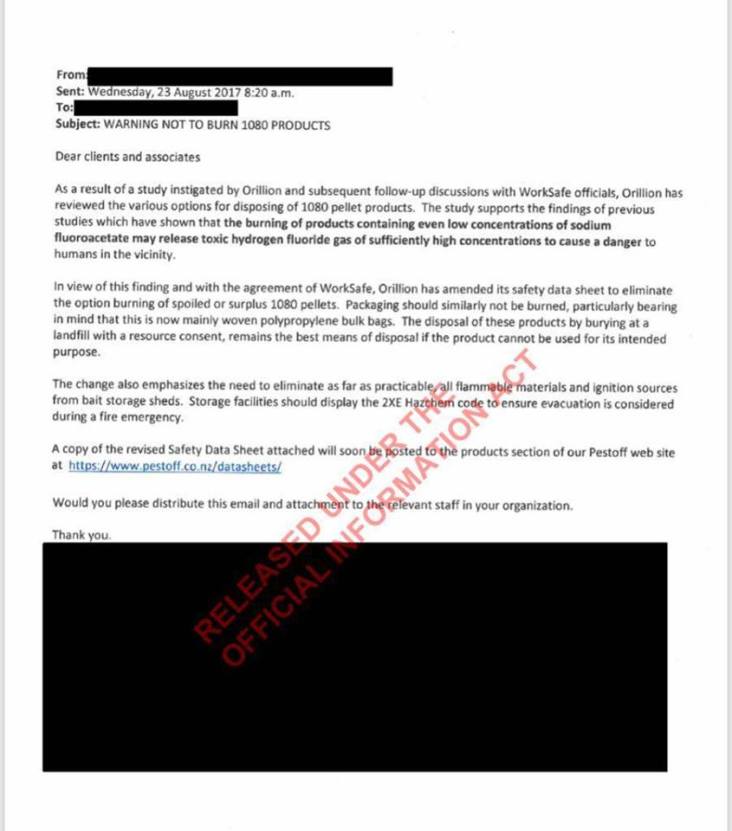 In Whitianga, in 2017, 23.7 tonnes of 1080 baits were stored by the Dept of Conservation at the back of the ‘Liquor King Building’ for 4 1/2 months. pending an aerial 1080 operation in the area. Locals were later informed that the district Fire Chief had been unaware of this. The Thames-Coromandel District Council was also reportedly unaware. The building was surrounded by two supermarkets and next door to a “Placemakers” store. Residential housing was just metres away, over the fence. On the evening of loading up, ( October 17, 2017 ), the air was thick with dust, which would have landed all over people’s lawns and vegetable gardens. The residents were not informed about what was going on.

At Tua Marina, near Blenheim, up to 200 tonnes of 1080 poison baits are allowed to be stored at any one time at 121 Thomas Road, at Impact Storage Ltd ( appropriate name!), just a few kilometres from the local primary school and beside the Wairau River.
NB: 200 tonnes of 1080 baits contain enough pure 1080 to kill 4 million x 70 kg human beings and make another 4 million very ill indeed!

and a dog’s death:

I was told “DoC have a lease on the old launderette building in Caswell St. They have stored 1080 in the past. ‘Fiordland Jet’ rent it from DoC when it is not needed.”

On the other side of the building, at 48 Caswell Road is “Safer Parking” !!!

“DoC spokeswoman Trish Grant said there were 73 tonnes of non-toxic bait and 150 tonnes of toxic bait in storage in the port industrial area.”!

a DoC worker came out and asked what we were up to, as we had taken photos.
I commented that the practice was despicable, storing 1080 50 metres from a restaraunt/bar and loading it at lunch time. I was told by the female DoC worker, “It’s wrapped and sealed” i commented that must be why I can smell cinnamon, and poison…
I also asked “What is the antidote for 1080 ?” She replied “Water”!”

And so it goes on… a disaster just waiting to happen. Or maybe it already has !!!

8. TE ANAU, Firodland – The old laundry building where 1080 poison baits are reportedly stored is 50 Caswell Road, Te Anau, ( with the red roof ). 52 Caswell Road is the Northern Southland Transport truck depot ( you can see the trucks moving around with their familiar brown and cream signature colours.) On the other side, at 48 Caswell Road is “Safer Parking”.

9. The old laundry building in Te Anau where 1080 poison baits are reportedly stored before aerial 1080 operations in Fiordland. When not being used for 1080 storage, DoC have dit out to Fiordland Jet

10. TE ANAU: “Safer Parking”, situated next door to the old laundry building that is reportedly used to store 1080 baits before aerial 1080 operations in Fiordland.

11. TE ANAU : The entrance to Northern Southland Transport Ltd’s yard, beside the old laundry building which is reportedly used to store 1080 baits before aerial 1080 operations

12. The old laundry building in Te Anau ( red roof ) where 1080 poison baits are reportedly stored before aerial 1080 operations in Fiordland. When not being used for 1080 storage, DoC have dit out to Fiordland Jet

13. PORT NELSON
A ‘Sollys’ truck being loaded with 1080 poison baits , 24 September, 2014, at AS Fiskevegn House, a blue-and-white warehouse over the road from the Anchor Restaurant. Photo – Merrick Allan. (NB: Sollys Transport have REFUSED to transport 1080 poison baits since 2014. The he big drops in 2016 and 2017 for Kahurangi were carted by T Croft Ltd.of Greymouth )

3 thoughts on “When are NZ authorities going to take toxic 1080 bait storage seriously?”