Predictably, after the NZ Govt ignored our two men who walked the entire length of the two Islands with their concerns about environmental pollution & the poisoning of our whenua & kai, the media continues to take from the hand that feeds them & report only what will support a favourable public perception of the deadly poison 1080. I stopped following mainstream long ago. It is owned by around six corporations now & no prizes for guessing the ownership of those.

Our growing fascist corporatocracy is well armed with willing participants ie sold out journos. You can swap out NY Times in the image below for NZ Herald, Stuff and so on, they’re all pretty much the same. Whore media basically.

Journos don’t bite the hand that feeds them. Don’t believe me? My opinion is not new.

“There is no such thing, at this state of the world’s history, in America, as an independent press. You know it and I know it. There is not one of you who dares to write your honest opinions, and if you did, you know beforehand that it would never appear in print. I am paid weekly for keeping my honest opinion out of the paper I am connected with. Others of you are paid similar salaries for similar things, and any of you who would be so foolish as to write honest opinions would be out on the streets looking for another job. If I allowed my honest opinions to appear in one issue of my paper, before twenty-four hours, my occupation would be gone. The business of the journalists is to destroy the truth, to lie outright, to pervert, to vilify, to fawn at the feet of mammon, and to  sell his country and his race for his daily bread. You know it and I know it, and what folly is this toasting an independent press? We are tools and vassals of rich men behind the scenes. We are the jumping jacks, they pull the strings and we dance. Our talents, our possibilities and our lives are all the property of other men. We are intellectual prostitutes”.   READ MORE

Note what they’re not mentioning about 1080:

I could go on.
It is as much about what is omitted as what is told to you. Try and comment on those news items and see the control go into action.

The image below I found online (please advise if it’s yours*) …. it so graphically describes what words never could. Quite appropriately also is the colour of the feed trough contents. The same as that of 1080 & the illusory clean green NZ. Your Govt has done a great job of rebranding the deadly poison that is odourless & colourless & has no antidote. As NZ’s Dr Charlie Baycroft warned us recently, if you die from 1080 poisoning no one will know. 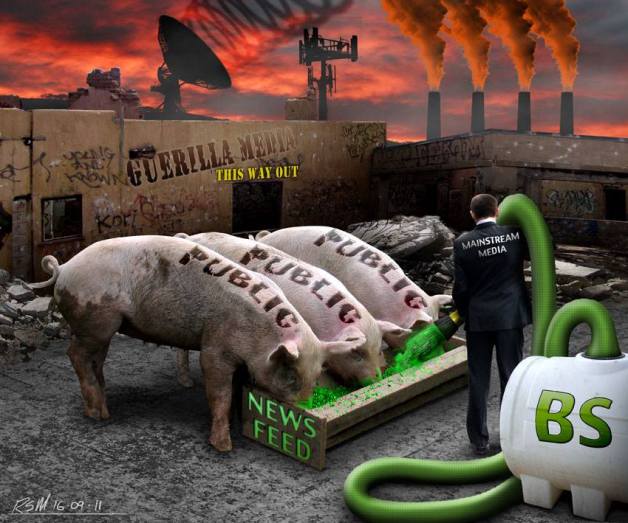 On the brighter side, the hikoi and protests on the 8th September have made an impact for sure. This is evidenced by the subsequent ramping up by mainstream of pro 1080 damage control.

A CONFIDENTIAL CHAMBER OF COMMERCE MEMO IN 1971 CALLED FOR A BIG BUSINESS MAKEOVER OF GOVT THROUGH CORPORATE CONTROL OF MEDIA, ACADEMIA, THE PULPIT, ARTS & SCIENCE

THE PURPOSE OF MAINSTREAM MEDIA IS THOUGHT CONTROL AND SUPPRESSION: HOW TO FIND THE FACTS BETWEEN THE PROPAGANDA

* Re the image,  please let me know if you decline permission to use it.