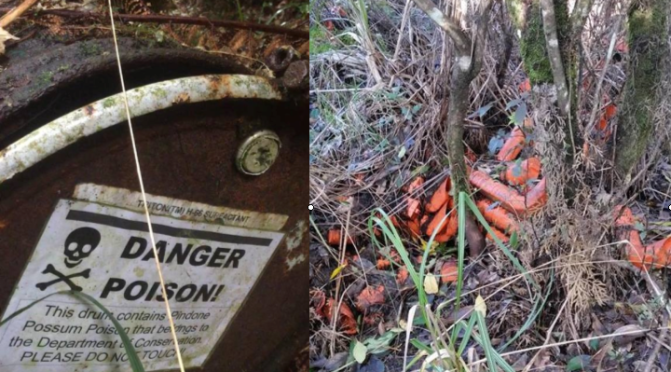 Thanks to Carol Sawyer & Australian visitor, Mark Slater for this compilation of facts about the apparent carelessness around the spread, storage & care of poison in our bush by NZ’s Department of Conservation. This article is about Pindone being left lying around, however the before & after storage & care of 1080 pellets after drops has also frequently been called into question by visitors, by locals who observe while hunting, tramping, trapping and so forth and by folk whose pets have been poisoned inadvertently. Watch carefully if you are tramping, hunting or just enjoying the scenery in NZ. What I find most disturbing is the number of comments I’m seeing on forums and feedback from tourists is that they don’t see many birds, just as Mark has commented here in this article. See our pages on suspected poisonings from such at the 1080 pages (main menu). (For other 1080 articles use the search box or ‘categories’ – left of news page). And if you have incidents where you’ve noticed this poison lying around, a lack of signage to warn the public, or if you’ve had your own farm animals or pets poisoned, record it and send it to me if you’d like it published. EnvirowatchRangitikei

“It should be pointed out that this is the area where the pig that poisoned the Putaruru family last year came from (see map). That was not Pindone poisoning, but almost certainly 1080 poisoning, but it shows how dangerous this Pureora Forest Park and our other wild places have become.”

Australian, Mark Slater, was in NZ last month hunting. He went on a hunting trip in Pureora Forest Park, with his son and three of his son’s Kiwi mates.

(Pureora Forest Park is in the North Island and straddles the Hauhungaroa and Rangitoto ranges west of Lake Taupo and east of Te Kuiti.)

I spoke to Mark today. He told me they were given permission to enter the Park through a farmer’s property and tramped for four and a half days, from one side to the other, where a vehicle was waiting to pick them up. They followed tracks with pink, yellow and green markers – see photo. All the tracks had names ( like Grassy Track, etc ).

Mark said ” The forest didn’t seem alive at all. I was last here three years ago and there were heaps of wood pigeons (Kereru) but this time I only saw two. We only saw 6 deer in four days.”

On Day 3 they came across two drums of Pindone Poison. They are 44 gallon drums (205 litres) and looked as though they had obviously been there for some time. One was standing up but the bottom was rusting out so it was leaking, and the one pictured, also rusting with the lid open, was lying on its side. The Pindone was in white hessian-look plastic but the bag was full of water. The poison was all wet and soggy. Mark said if the water is getting in, then there must be a hole in the bags, so it will be leaking out onto the ground.

He was quite shocked but he said the Kiwis were reasonably blasé about it. (We have become so used to the irresponsible behaviour of our Dept of Conservation !)

Mark says “I was more shocked that I was drinking the water downstream ! I thought hunters should know.”

Since I posted this, Roy Hollister has provided the attached photo ( taken 13/10/ 2016 ) of abandoned bait stations in Pureora Forest Park. I asked if any poison was still in them but he says there was no sign of poison residue in any of the traps – how slack, though, to leave piles like that lying around in the bush !
Roy says “I’d say looking at the leaf litter on top of them they had been there 5 or more years. They are next to the Kitemairangi Road which takes you up to the Kitemairangi loop track in Piropiro flats, South Pureora Forest Park. We witnessed the 1080 drop there a few years back The decline in bird life and morning chorus was outstanding. We were in the forest 3 months after the drop and still found baits on the ground.”
Roy adds ” The abandoned bait stations were still there as of April 11, 2018 “.

It should be pointed out that this is the area where the pig that poisoned the Putaruru family last year came from ( see map ). That was not Pindone poisoning, but almost certainly 1080 poisoning, but it shows how dangerous this Pureora Forest Park and our other wild places have become.

Photos (not in the documented order): 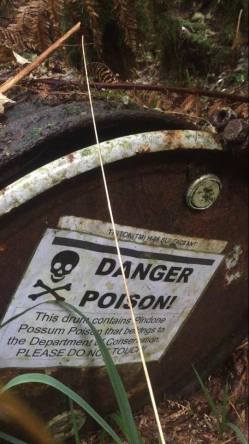 RELATED – A 1080 POISON DROP IN PUREORA FOREST PARK – VIDEO BY THE GRAFBOYS: