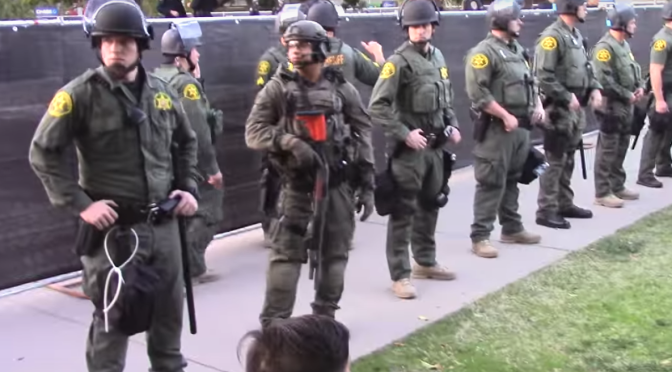 Learn how the American Banking Cartel has you & your respective (once sovereign) nations by the short and curlies.  Observations here in these videos by Joe Imbriano from Fullerton California who is warning folk of imminent martial law & police state enforced restriction of your freedoms. There has been a blending world wide of the military & law enforcement & we have seen troops from world wide locations training together including in NZ, some resulting in violence. We’ve seen these exercises regularly now. We’ve also seen thuggery with DoC & their contracted security guards.

Remember the Tuhoe raids people? This is all a show of force as these videos below highlight. Over kill of law enforcement designed to intimidate you.  With the Tuhoe raids a children’s school bus was boarded by police dressed in black gear with guns, terrifying little children. They also detained women & children in a garage for many hours without water, toilet or food. Watch that video at the link.  A Horowhenua man has also been the subject of alleged assault by Police, with local Council also cutting off his water supply. Don’t think it can’t happen here in NZ because it has & is already.

A brief synopsis of the plight of the American people as the second amendment is being eroded and what this means to all of us.

Note, the plans for America are the same everywhere. Agenda 21 now 30 is about total world control, and not the benevolent global village you’ve been led to believe, that some of us have now woken up to.