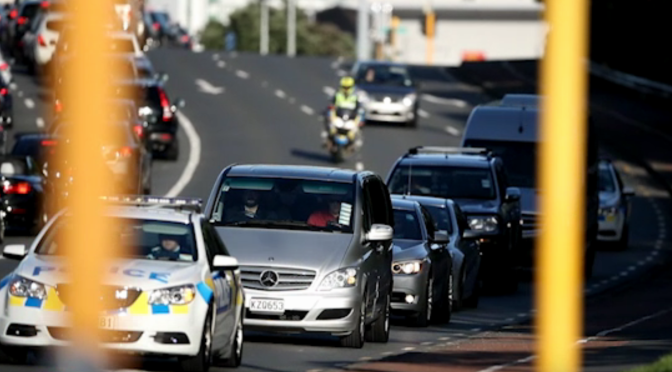 I expect they won’t be discussing the homeless at all? Or our growing child poverty rate? I note the agri tech companies will be dining with him. Check out our recent post on the other simultaneous events taking place. With a complete media ban of course the increasingly restless population of NZ won’t be privy to any of the real agenda for this visit. Free press & transparency are a thing of the distant past. Can you see a very new picture emerging? Note the security. The large gap that neo lib economics has produced both here & globally, between the rich and the poor, necessitates this entourage of muscle. They are flocking here in droves purchasing swathes of property, escaping the very mayhem their own greed & selfishness has bred. I personally see writing on the wall that isn’t good. Watch this space.

Barack Obama landed in New Zealand early this morning – and our own former Prime Minister, John Key, and his family are already on their way north for a golfing rendezvous with the former president.

Obama is on his first visit to New Zealand and organisers are pulling out all the stops – from actor Sam Neill as one of his hosts, to flying in chef Peter Gordon from London to cook for him.

The 44th president of the United States of America landed in a private Gulfstream jet at Auckland International Airport at 12.13am on Wednesday after spending two days in Singapore. There was a heavy police presence.

A quick peruse at this link will tell you golf’s on the agenda. Hobnobbing with the rich & famous. Or are he & Key discussing how he’s sold us all out? Sold all the housing the likes of which he once lived in? Or perhaps they’re discussing the growing child poverty rate? Or homelessness? Not likely.

And amidst a media ban, so what don’t they want the public of NZ to know?

“Former US President Barack Obama will enforce an extensive ban on media and publicity during his visit to New Zealand this week.

There will be no interviews and media cannot report from inside his event.

Newshub has learned the secrecy extends to those invited to his event, who are set to be prohibited from posting to their own social media.

At his most recent event this year at the Massachusetts Institute of Technology, the rules were that “photography, video recording, streaming and social media posting, including on Twitter, Facebook, Instagram, Snapchat and other platforms will not be permitted without exception”.

Five Eyes military exercise takes place under pretext of ‘Air Show’ as Jacinda Adern welcomes Obama in preparation of US joining TPPA in 2020.

One thought on “Obama now here in NZ amidst a complete media ban – what’s to hide?”