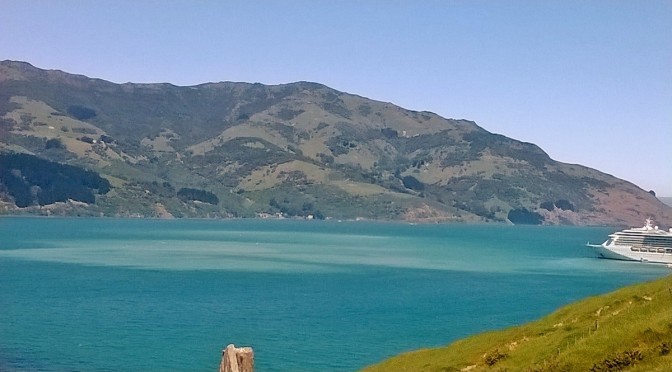 Here is a topic that’s slipped somewhat under the radar and is affecting beautiful Akaroa in the South Island … the pollution from cruise ships. An Akaroa reader affected by this issue to the extent they sometimes wear a mask, contacted me recently saying they’d tried both government and media channels with a largely ‘not interested’ response. Turns out the issue’s been written about by a University lecturer Dr Bevan Marten (link below the reader’s piece) who says:

It is with a heavy heart I farewell the winter … cold, clear, cleansing southerly winds blowing through the harbour heads straight from the Antarctic.

Today, as dawn breaks , the onslaught of mighty tourism blows through the heads. Just one of 80 ships to visit this season.

Another season of poisonous sulphurous emissions … 12 hours day … often 2 or 3 ships per day … 7am to 7pm.

The air is sharp … stings the throat … wear a mask outside and keep windows closed.

Because of the shallowness of the harbour these floating cities moor out in the open harbour. The engines are pumping all day, swinging 360 degrees on their mooring to stay facing the prevailing winds.

The sediment disturbance turns the harbour a milky grey.

What does this do to the Hector dolphins, the paua beds?

Seven pm and the engines ramp up for departure. The smoke spreads, the sediment spreads. The bilge water pumps out into our harbour.

Our council bans woodburners in Chch for home heating. Our council plans to have electric cars. Why bother?

Six months of poison pumping into our air negates all such clever initiatives.

Dr Bevan Marten is a Senior Lecturer in Victoria University of Wellington’s School of Law, specialising in maritime and transport law. He is scathing about the damage those gleaming white cruise ships are doing to the environment.

New Zealand’s lack of action over air pollution from shipping is an international embarrassment. This is true of both the country’s commitment to addressing global climate change and the safeguarding of local air quality. Walking along Auckland’s waterfront, that gleaming white cruise ship may look spotless but the fumes coming out of its funnel might be anything but. It’s time to tell the Government to get serious.

Larger ships mostly burn “bunker” fuel, a grade of oil closer to Marmite than anything the local service station will pour you. It’s also a key source of pollutants such as sulphur dioxides, nitrogen oxides and particulate matter.

Sulphur dioxide in particular creates a risk to human health, despite not having the telltale smog we associate with the problems faced in cities like Beijing. And while we have largely removed sulphur dioxide emissions from road vehicles and some industries, shipping remains a major source of this pollutant.

The global community has long acknowledged this issue. In 1997, countries agreed to Annex VI of the International Convention on the Prevention of Pollution from Ships (known as MARPOL, short for marine pollution). In addition to rules improving ship engine efficiency, this included a promise to reduce the maximum sulphur content of ships’ fuel to 3.5 percent in 2012 and 0.5 percent in 2020. Between 2006 and 2014, special emission control areas covering much of Northern Europe and North America entered into force, bringing sulphur content there down to just 0.1 percent.

6 thoughts on “A pollution problem you probably weren’t aware of – concern expressed by an Akaroa resident, a problem dubbed an “international embarrassment” by Victoria University Law Lecturer”