Well, wars are about money. Ask General Smedley Butler who blew the whistle last round on full scale global slaughter by the money machine/cartel. Watch this man who exposes the Military Industrial Complex. Your government/corporation has recently committed 20 billion dollars to this machine, while kids starve, people sleep in their cars and the most number of teenagers in the world proportionately kill themselves. The Nats don’t particularly care about that, after all their former in-bed-with-the-banking-cartel-leader has been knighted for his efforts in multiplying our debt to half a trillion dollars.  What’s new? EWR

Why are martial law military exercises being held in Local Communities?

Residents in Tasman-Buller question the New Zealand Defence Force’s judgement in staging more huge ‘war games’ in their townships.  This year’s exercise began last week and will continue until mid-November. The military exercise continues Southern Katipo, held in Nelson-Tasman-Buller-Marlborough in 2015. This year, West Coast and Kaikoura districts are included.

More than two thousand troops from New Zealand, the US, UK, Canada, Australia, the Pacific and elsewhere are involved. Some military personnel are ‘embedded’ in local communities before the exercise begins.

During the 2015 exercise, Murchison (population 500), was ‘occupied’ by international military forces for one month. While some Murchison residents were comfortable with that, others say it was a stressful ordeal.

Parks and sports areas were requisitioned by the military and declared off-limits to locals, while troops conducted armed exercises around the shopping area, on domestic streets, in rural areas and within Kahurangi National Park.

One woman said that ‘Helicopters buzzed overhead for most of the day, huge military aircraft flew low over our homes, and it was scary waking up to find armed troops running up your street.’

During one exercise, NZDF invited Murchison residents to volunteer to stage a mock protest against the military.  Civilians, including a large number of school students, willingly took part, waving placards and throwing water bombs at troops, and they were encouraged to chant and act aggressively toward troops.

New Zealand Defence Force director of joint exercise planning Lieutenant Colonel Martin Dransfield later described the fracas as ‘unfortunate’ and said all attempts would be made to avoid a similar outcome during this year’s operation. 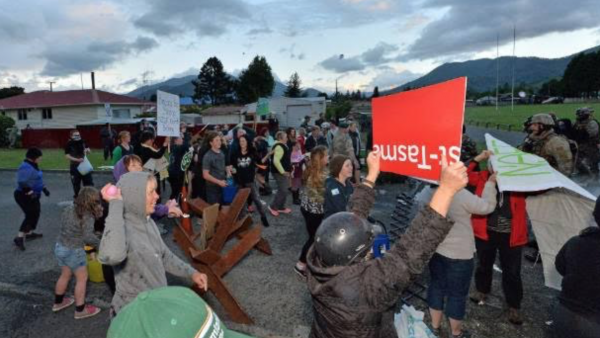 Others say that is not good enough and that urban ‘war game’ exercises should be banned altogether, and that a public enquiry should be conducted into the Murchison event.

The use of civilian volunteers in ‘war-game’ activities shows a regrettable lack of judgement on the part of NZDF, and encouraging school students to take part in the exercises is simply irresponsible.  One can only hope that new Health and Safety regulations will preclude civilian involvement in order to ensure their safety in the future.

The 2015 war games left an unpleasant taste in some people’s mouths. One woman who took part in an actual protest, peacefully standing with other Murchison women opposed to the military’s entry into their town, said the women were manhandled with unnecessary aggression by troops. She says the ‘war-games’ experience has left her with a lingering fear of the military, and a mistrust of the police, who worked in tandem with them for the duration of the exercise.

If the exercises had been designed solely for humanitarian purposes – support after a natural disaster, such as an earthquake or severe weather event – they would be welcome, but the exercises are fundamentally designed to quell ‘civil unrest’, and that is where the story begins to get very murky.

The military exercises are supposedly based on a fictitious scenario set in a Pacific region called Becara, which is now suffering high unemployment, due to a decline in forestry, coal and gold mining and ‘low investor confidence’.  When the Becaran government proposes a new economic vision for the region, some Becarans object and form a resistance movement to oppose it.

What worries some locals is that NZDF also say that the exercises could potentially be used ‘either in New Zealand or one of our Pacific neighbours’ and it’s the admission they could be enacted in New Zealand that gives cause for concern.

Becara bears an uncanny resemblance to the southern West Coast, where the former National Government was working hard to implement ‘special economic zones’ which would allow them to bypass existing regulations in order to speed up the issuance of mining and oil exploration permits.

And with off-shore oil drilling also a contentious issue in the region, is it too much of a coincidence that this year’s exercise includes a military response to ‘a dispute over offshore oil reserves’?

The Tasman-Buller-West Coast region home to numerous environmentalists who are likely to resist the development of special economic zones and offshore oil drilling, which raises the question of why NZDF specifically asked locals to pay the role of ‘protesters’ against them during the Murchison protest.  Denigrating protesters by inference sets a dangerous precedence in a country like New Zealand, where the right to free speech and peaceful protest is still considered a civil right and a democratic privilege.

And finally, if five military helicopters, six airlift aircraft, two Globemasters and an Orion surveillance aircraft were not enough to worry a small town, many New Zealanders would be concerned to learn that a highly sophisticated RQ4 Global Hawk drone, remotely operated from the US Air Base in Guam, also took part in the exercise.  It’s role? To capture ‘images of simulated adversary areas of interest’.

NZ Defence say the drone’s visit was in accordance with the New Zealand Search and Surveillance Act of 2012, and that owners of land in the area gave permission for imagery to be taken.  This would hardly allay the fears of many New Zealanders likely to be alarmed at the surveillance role the US played in the exercise. Having a US drone this sophisticated, more commonly deployed in US war zones, tracking ‘adversaries’ – simulated or otherwise – over New Zealand land is a matter of public concern.

One local believes that actual surveillance was taking place on the ground well before, and well after, the exercise, and that some military informants were embedded as wwoofers to spy on some residents.

The decision to hold war games in residential settings are a legacy of PM John Key’s tenure, and well overdue for review. New Zealanders don’t need armed troops running up suburban streets, military helicopters buzzing overhead or school students role-playing for the army.  Nor do they need foreign drones in the air or military ‘actors’ secretly embedded in their communities gathering information. It’s high time that military exercises were urgently returned to military bases local New Zealand communities allowed to get on with their peaceful lives.

Barbara Creswell is a concerned citizen.

4 thoughts on “Why are martial law military exercises being held in Local Communities?”