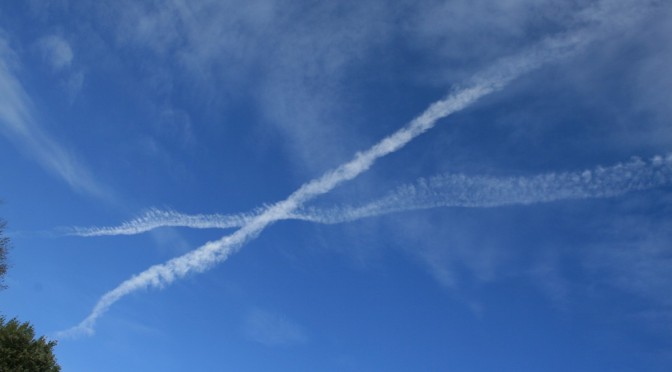 Whilst geoengineering has been dubbed a hoax or a conspiracy theory by many, at least do yourself the favour of researching it for yourself. The science of geoengineering  has been researched and practiced for decades.

Geoengineering is the practice of modifying our weather. For a timeline of how weather modification has been developed visit http://climateviewer.com/geoengineering/ It is well documented. The slang term often used for these trails left by the aircraft is ‘chemtrails’. Bear in mind this is the term used in the US Space Preservation Act 2001, HR2977, Sec 7, (2) (B) (ii), defining them as an ‘exotic weapons system’.

NZ’s former Minister for the Environment, Hon Amy Adams said this about geoengineering:

Thank you for your email of 21 March 2014 to Hon Dr Jonathan Coleman regarding aircraft emissions. I am replying on his behalf to the second part of your email as the issue you raise falls within my portfolio as Minister for the Environment.

Geoengineering is a theoretical concept that would involve the manipulation of the earth’s environment to make the effect of climate change less severe. Aerosol engineering, the spraying of aerosol particles into the upper atmosphere to cool the earth, is a proposed geoengineering method.

The Government does not allow aerosol geoengineering and although it is the subject of some discussion in the scientific community, it is not an accepted method to address climate change. The best option is climate change mitigation – reducing our emissions of greenhouse gases – and the Government is working with other countries to develop an international agreement to achieve this.

I would like to assure you that there is no deliberate spraying of the nature you suggest and that the health and well-being of New Zealand citizens and our environment are a high priority for this Government.

Hon Nick Smith, current Min for the Environment, and also Amy-Adams’ predecessor, said in Parliament (amidst gales of laughter) that geoengineering was a hoax.

We have an official change of tack here.

Here is a record of geoengineering activity over the Rangitikei region in New Zealand for January 2015. These trails are visible most days in their various manifestations.

Soundtrack is by Saru G